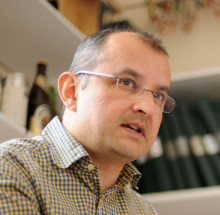 KJ Patel, group leader in the Laboratory of Molecular Biology’s PNAC Division, has been elected as a Fellow of the Royal Society, in recognition of his outstanding research on DNA repair and chromosome breakage

The Royal Society is a Fellowship of the world’s most eminent scientists and is the oldest scientific academy in continuous existence.

KJ is working on the molecular basis of inherited genomic instability and the role it plays in the biology of stem cells. His research has led to new insights into how toxins released from metabolism can damage the DNA of stem cells, particularly in those that produce blood. Studies carried out by his laboratory have uncovered how the body defends itself against these toxic metabolites through a dual protection mechanism that involves degradation of these metabolites and a specific form of DNA repair, the Fanconi anaemia DNA repair pathway. His work has also shown how the toxic by-product of alcohol metabolism, acetaldehyde, damages DNA and may contribute to diseases associated with ethanol abuse, such as fetal alcohol syndrome and certain common cancers.

KJ, who is medically qualified, has had a long career in the LMB having done his PhD with Michael Neuberger. He returned for postdoctoral training, then became a tenure track group leader (MRC Senior Clinical Fellow) and has been a tenured group leader since 2007.

The Royal Society seeks to promote excellence in science through its Fellowship and Foreign membership. Each year, the Royal Society elects up to 52 new Fellows and up to ten new Foreign Members, recognising those scientists who have made substantial contributions to the improvement of knowledge in the sciences.