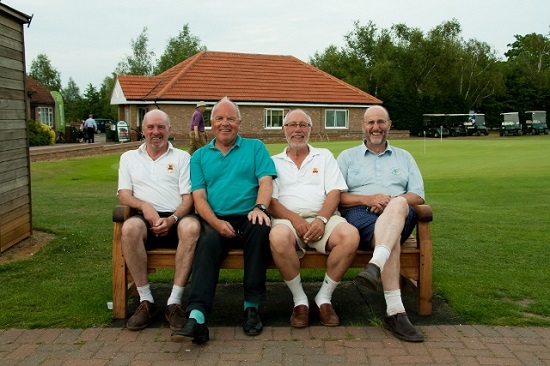 A bi-annual Charity Golf Day last week was a huge success, taking the grand total of funds raised by the event since it started to £45,000.

Thirty one teams took part in a charity golf day, raising money for Arthur Rank Hospice Charity on Friday (26th June) at The Gog Magog Golf course. The bi-annual fundraising event, which is organised by John Hodgson and his brother Dalby, a Senior Marshal at the course, was a huge success - raising more than £10,000, which takes the grand total raised by the event over the years to an astounding £45,000.

The Gupta Cuppers (pictured) , led by ex Gogs Captain Mike Morrison, included Richard Brimblecombe, Robert Ware and Alistair Rust - who were playing in memory of their friend, the late Nigel Harrison - were champions on a day of sunshine and competition with an impressive total of 111 stableford points, closely followed by teams Thomas Morris (110) and Solopark 2 (108). Michael Morrison, Team Captain said: “We had champagne for breakfast with our bacon roll and set our goal for the day; pure and simple, to have a good time together and raise money for Arthur Rank Hospice. That’s all we wanted to achieve and we’re delighted that we won too, of course.”

The Gog Magog Golf Club kindly hosted the event, allowing fees from participating teams to be donated to the charity. Headline sponsors included Solopark who entered two teams and Buckingham & Stanley Group who supplied hole-in-one prizes including an MG 3 resplendent in yellow on the 9th, a set of TaylorMade clubs, a three night stay at a five star beach resort in Portugal and a two night stay and golf at the Marriott Forest of Arden. Further funds were raised on the course via a raffle on the tricky 17th for players who landed on the green, a nearest the bottle putting competition sponsored by Noel Young Wines, as well as a vast tombola, silent auction, and reverse auction in the Club House after the game.

Donna Talbot, Director of Fundraising and Communications, adds: “The amount raised by this golf day every two years never ceases to amaze me and it’s incredible to think that the next time it happens Arthur Rank Hospice will be in its new home across the road from the course. We really are so grateful to the organisers and participants for all their hard work and support in putting together such an enjoyable day. Events like this are essential in order for us to keep providing specialist palliative care and support to adult patients and their family, friends and carers across Cambridgeshire.”