Granta Park is haven for wildlife 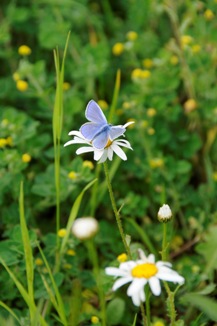 The environment at Granta Park, the science park south of Cambridge, is proving to be a haven for all types of plants along with at least 18 species of birds, rabbits, hares and invertebrates.

A group from Abington Naturewatch toured the meadow and lake area to record species and were impressed with the extent to which wildlife was flourishing, particularly given the recent hot weather.

Says the group’s coordinator Patrick Daunt: “It was a very fruitful visit and good to see the environment created at Granta Park getting better year on year. Plants generally are surviving the long hot dry spell better than we expected with some species, such as Mallow and Dark Mullein, especially flourishing.”

Plenty of rabbits were seen, along with and one hare near the cricket field. Moths, butterflies and one Blue Damselfly were also recorded.

Adds Patrick: “The immediate value and good long-term prospects for quality and diversity of species which the meadow and lake afford was much appreciated by the members.”