Out of this world: Red Gate sends a DBA into space 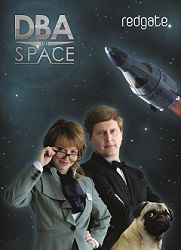 Red Gate, the Cambridge-based software company, has launched a campaign that will reward a database administrator (DBA) with the ultimate getaway: a seat on a commercial flight into space, courtesy of Space Adventures, Ltd.

But first, DBAs must unravel a Gordian knot of a plot involving morphing Martians, pets in peril, alien body parts and abduction of one of their own – all unfolding in a five-week series of snazzy (and frankly surreal) 60s-style space-noir B-movies.

Fifteen finalists will be selected from those who provide the best answers to quizzes within the videos and the ripest tweets from dataspace. The winning DBA will be elected by popular vote to join the first citizens of Earth to sail beyond our atmosphere.

Why a DBA? Because they’re the most important people you’ve never heard of. The world is not kept spinning on its course by politicians or financiers. It’s the humble DBA who makes it happen – the Master of Data who enables medical records to be summoned in the blink of an eye, keeps transport running smoothly, manages the data beneath the electrical grid for billions of people and provides instant access to news, music, phone calls, money and an endless supply of entertainment.

So, knowing how DBAs dig space and everything related to it, Red Gate is going to send one of them straight up, a cat’s whisker above the Kármán line – at 62 miles, the official boundary of space – into pitch black, gazing back on the impossibly cool view of planet earth, the view that astronaut Edgar Mitchell called “a glimpse of divinity.”

Join Red Gate in saluting the scandalously underappreciated DBA. Strap on the helmet, don the gloves, and check out the once-in-a-lifetime adventure that begins here: http://www.dbainspace.com.

Red Gate creates ingeniously simple software tools used by more than 500,000 IT professionals worldwide.  The company works to uplift the market it serves through free web community sites, technical publications and conference sponsorships that reach millions annually.  For four years, Red Gate has sponsored the Exceptional DBA of the Year award, honoring the DBA who exemplifies the virtues of knowledge, sharing and dedicated service.