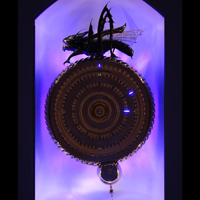 A mesmerising £1m clock with no hands and a time-eating beast perched on its summit was unveiled by Professor Stephen Hawking at Corpus Christi College on Friday.

The Corpus Clock, designed by Dr John Taylor, has been seven years in the making - with part of it engineered underwater at a secret Dutch military research institute.

Featuring a blinking, jaw-snapping, tail-wagging 'Chronophage' (time eater) in perpetual motion, the Corpus Clock has been described as both 'hypnotically beautiful and deeply disturbing'.

Designed especially for the exterior of Corpus Christi College's new library, it is both a radical new way of telling the time and a piece of public art.

It was built by a team of high-precision engineers and master craftsmen, led by Dr Taylor, an inventor and horologist who studied at the college in the 1950s.

Instead of being hidden away inside the clock, however, the mechanism has been transformed into a giant 'Chronophage' (time-eater) - which drives the clock, literally eating away time. It is the largest Grasshopper escapement of any clock in the world.

Constantly in motion, the Chronophage has a repertoire of slow blinks, jaw-snaps and stings from its tail.

Below the creature, the time-telling part of the clock is also constantly in motion. The clock has no hands, or digital numerals, but instead a series of vernier slits cut into the face. Blue LED lights are arranged behind the slits, so that when the escape wheel moves, a series of rapidly darting lights run in concentric circles and pause at the correct hour, minute, and second. What appears to be flashing lights in sequence are actually powered mechanically.

The Corpus Clock's massive round face, nearly 4ft in diameter, was engineered from a single sheet of stainless steel; the mouldings literally blasted into place by precisely-controlled explosions under the sea. On the hour, the clock reminds us of our mortality with the sound of a chain dropping into a wooden coffin. More playfully, the clock plays tricks on the observer, seeming occasionally to pause, run unevenly and even go backwards. All this is achieved through mechanics rather than computer programming.

The Corpus Clock and the Chronophage (Video)