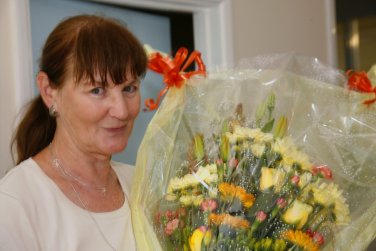 Staff at St Ives (Cambridgeshire) based Prism Electronics have been celebrating as another member of its team notches up a long-service record with the company.

Among staff at the award winning facility, one has recently reached a significant milestone in her employment with the company. Brenda Butcher (pictured) has now been with Prism and its predecessor for 25 years. She joins Bill Smettem who also celebrated reaching his 25 years service not long ago.

Brenda joined Prism as secretary to the managing director. Over the years her role has grown and developed into her current position of company personnel officer and P/A to the directors.

“I started my career as an office junior and gained my secretarial qualifications prior to joining Prism as secretary to the managing director. Little did I think I would still be here 25 years later but I found it such a rewarding place to work and the people so friendly that I stayed with the company,” said Brenda.

“Because I have been here so long, over the years I have been involved in many aspects of the company including sales administration, payroll and human resources.

“Prism is a great company to work for and I have never had time to be bored since I joined. It has been very supportive and encouraging over the years. My days have never become repetitive because my role here is such a diverse one.”

Brenda has seen many changes over her 25 years service, not least in technology. “When I first joined Prism I used an electronic typewriter with a small screen. Over the years I have trained in a number of office systems and software tools to keep pace with the changes in technology. As well as having an overall administration role I am also very much involved in HR, which has been an ambition of mine since I started out as an office junior.”

Prism technical director Richard Walton said: “Brenda is our HR department and she is an extremely valuable asset to the company.”

To mark her 25 years with Prism Brenda received a cake, flowers and her long service watch in a ceremony held in the staff canteen. “All my colleagues were there and I did feel a little embarrassed,” she said.

Presenting Brenda with her long service watch managing director David Aspinall said: “We’re delighted to recognise Brenda’s loyalty to Prism. All her hard work and dedication over the past 25 years is greatly valued.

“Brenda has been a great asset to Prism over the years and fulfils a valuable administrative and HR role. She has seen many changes over the last 25 years and has taken them all in her stride.”

Photo caption: Prism’s Brenda Butcher was presented with flowers, a cake and her long service watch to mark her 25 years service with the company.

Established in 1990, Cambridgeshire-based Prism Electronics is an electronics manufacturing services (EMS) provider which develops and manufactures a wide range of electronics assemblies for original equipment manufacturers.

The company specialises in providing services to high-tech industries as well as to the military, medical and scientific sectors.