Cambridge Airport is 'switched on' with electric car

Cambridge Airport is now one of the most ‘switched on’ Airports in the United Kingdom, having taken delivery of a new Peugeot Ion all-electric motor car. The car will be used for a variety of general purposes around the airfield and for runs to and from the Airport into Cambridge. 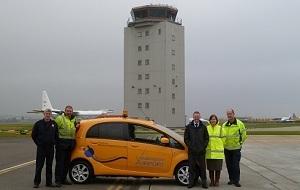 Marshall of Cambridge Group Environmental Manager, James Heffron, said: “Peugeot Ion is perfect for short regular journeys in and around the Airport, and as this green technology becomes more affordable and accessible, we have plans to see more electric vehicles operating within the Marshall Businesses”.

The car was supplied to the Airport by Marshall of Cambridge Peugeot on Newmarket Road.  The all electric car is powered by rear mounted 64bhp motor, whilst the 88-cell, 16 kWh lithium ion battery pack is mounted under the centre of the vehicle.  The car has a very respectable performance with a top speed of 81 mph and 0-62 mph acceleration in 15.9 seconds.  Like all electric cars the ION can be charged via a standard household electric outlet.  Its battery pack can be charged in around 6 hours, after which it can achieve 93 miles of driving.

Airport Director, Archie Garden, said: “The Airport has been taking a very proactive stand towards ‘sustainability in Aviation’ and with its zero CO² emissions per kilometre ‘at tailpipe’, the Ion will contribute significantly to reducing the carbon emissions from Cambridge Airport”.