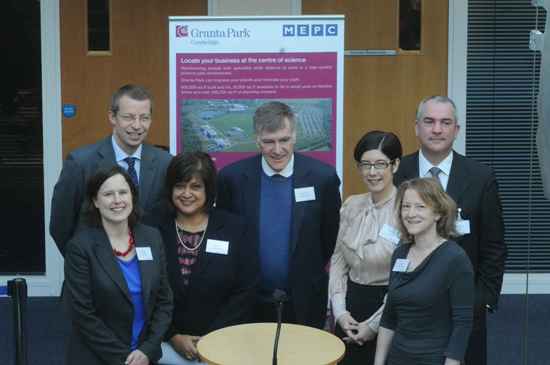 The first Cambridge Awards Week, a celebration of Cambridgeshire as a great place to work and do business, got off to an early start on Monday in the beautiful sunshine with a breakfast for more than 90 business movers and shakers at TWI’s headquarters at science park Granta Park.

It was officially launched by Charles Cotton of Cambridge Phenomenon, an organisation set up to acknowledge the phenomenon that has been happening in the city since 1960, who said that entrepreneurship in Cambridge could be dated back to the 1880s and that Cambridge ideas really do “change the world”.

“This is an amazing week of celebrations and I hope it will become a feature of the Cambridge calendar in the coming years,” he said.

Roz Bird of Granta Park thanked the major networks Cambridge Network, Cambridge Wireless and One Nucleus for their enthusiasm and support in setting up the week. “I’m delighted with the turnout out today and the support from the Cambridge business community. We look forward to an exciting week of events and networking.”

Roz was interviewed on BBC Radio Cambridgeshire before the event to talk about Cambridge Awards Week and the Cambridgeshire ‘supercluster’ in response to an Experian report that placed South Cambs seventh  in the UK in terms of the number of high performing growth businesses.. This can be listened to at http://www.bbc.co.uk/iplayer/console/p00pnkgn (One hour 21 minutes)

Graham Ayres, Managing Director of Iliffe News and Media East said that “We’re surrounded by depressing international and national news on the economy so it’s good to stand back and give recognition to some positive stories during this week and I am pleased that Cambridge News is part of this week. ”