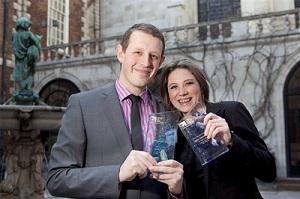 Jagex has been offering undergraduate work experience opportunities since 2006. Its current scheme runs for 12 months and provides a well rounded view of the skills and opportunities that occur in the games industry.  As well as gaining valuable industry experience, students working at Jagex help to provide vital support for the online game RuneScape, the company’s multi-award winning flagship title.

After beating IBM and four other companies in the category for large organisations offering long-term schemes for more than 20 students, Jagex went on to be crowned overall winner of the NCWE Awards 2012. Exeter City Football Club was runner-up and received a Judges Commendation.

The judging panel represented the full internship process through a number of senior professionals, including specialists from Which? and Regent’s College. They applauded Jagex for ‘providing a positive mix of structure and creativity’ as well as ‘a remarkable package that showed concern not just for skills development, but also for the welfare of the student’.

The winners were announced at a glittering ceremony at Merchant Taylors’ Hall in London by Dr Paul Redmond from The University of Liverpool, one of the UK’s leading experts on graduate employability and the Association of Graduate Careers Advisory Services President Elect.

Laura Hare, Human Resources Manager at Jagex says: “We are delighted to have won such a prestigious award for our internship scheme, which is about to complete its sixth year.  There was some really tough competition this year. It goes without saying that we are incredibly proud of our achievement, as it stands as a real testament to the hard work of those who operate the scheme and the excellent students we employ.”

Mike Hill, chief executive of the Higher Education Careers Services Unit, which operates the NCWE says: “We’re now in the ninth year of the NCWE Awards, so it’s good to see so many new companies entering as well as organisations that take part year after year. Jagex is a well deserved winner, offering a unique experience and strong work, life balance.”

The NCWE Awards received a record number of entries this year, with around 200 organisations across the UK competing for a total of 28 awards.

They recognise businesses from all sectors and sizes that provide exceptional student and graduate internships. This year’s sponsors include the AGR, Changeboard, GlaxoSmithKline, Centrica, Holiday Extras, CRCC Asia, PlaceNet and Intel.