John Preece, a former Royal Air Force and Marshall of Cambridge Test Pilot who lives in Cambridge, has finally retired at the age of 75. 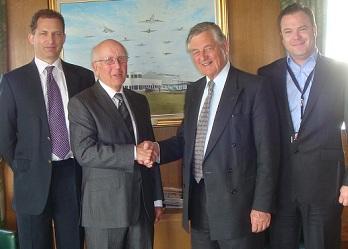 John Preece joined the Royal Air Force for National Service in 1954 as a pilot and after serving as a Fighter Pilot and an RAF Pilot during the making of the film ‘The Battle of Britain’, flying Spitfires, Hurricanes and ME 109s at RAF Duxford, John became a Test Pilot working for the British Aircraft Corporation.  Following this he joined Marshall of Cambridge on 1 January 1975 as a Test Pilot and Deputy Airport Manager.

Although he retired from Marshall after a relatively short period of 13 years in order to work for the Mission Aviation Fellowship, a Christian Organisation providing flying service in third world countries, he returned to Cambridge in 1995 and continued as a Flying Instructor with the Cambridge Aero Club.  This continued until his retirement at the end of 2011, when he reached the age of 75.  During his time with Marshall of Cambridge John has flown over 5,000 instructional hours with the Cambridge Aero Club and altogether in 56 years of professional flying has flown 12,750 hours on over 50 different types of aircraft.

Sir Michael Marshall met with John Preece in the Control Building at Marshall of Cambridge yesterday (Thursday 29 March) to wish him a happy retirement.

Sir Michael Marshal said: “John’s flying career has really been quite remarkable and he has provided long and distinguished service to aviation over an extraordinarily long period.  Of particular note and significance to Marshall of Cambridge is that John completed the first air-to-air refuelling trials of the Hercules aircraft in 1982, when in a record-breaking 19 days the Company converted the Hercules to receive fuel in flight, which enabled it to take part in the operations in the South Atlantic in the Falklands Conflict almost exactly 30 years ago.”

Founded in 1909 with little capital as a chauffeur drive company in Cambridge, Marshall moved into the retail motor business in 1910, obtained the Austin Distributorship for Cambridgeshire in 1920 and entered the aviation business in 1929.  With all its growth funded by ploughed-back profits, the Marshall Group remains a privately owned family Company, with a turnover of over £1bn per annum.  The Group of Companies is chaired by the third generation of the Marshall family, and employs members of the fourth generation.  The Group currently employs just over 4,000 people working in the fields of aerospace engineering; design and manufacture of specialist vehicle applications, military mobility shelters and hospital surgical units; motor vehicle sales and after sales support; refrigerated transport sales and support; and property ownership and management.   (www.marshallgroup.co.uk)


ROYAL AIR FORCE
I joined the RAF for National Service in 1954. Selected for pilot training and awarded wings in 1956, I extended service initially for eight years but in 1961 was given a permanent commission.
I served on two Hunter squadrons before being posted to The Central Fighter Establishment as an instructor on the Day Fighter Combat School.

I attended The Central Flying School in 1967 and did a tour as a flying Instructor.
In 1968, I was selected as one of twelve RAF pilots to take part in the making of the film “The Battle of Britain”, flying Spitfires, Hurricanes and a few German Aircraft.

After that came a loan service posting to The Royal Malaysian Air Force helping to form their first fighter squadrons after British withdrawal from the Far East. Awarded Queen’s commendation for this work.
Promoted to Squadron Leader in !971, I was attached to British Aircraft Corporation as Jaguar Liaison Pilot, particularly helping in the development of the weapons systems. Delivered the first Jaguar to RAF Lossiemouth in 1973.

MARSHALL OF CAMBRIDGE
Joined the Marshall Company on 1 Jan 75 as test pilot and deputy airport manager.

I worked under Lesley Worsdell on various airport developments including preparations for the first Tristars to use the field. I was made responsible for the snow plan and VIP visits.

In company with Bob Smythe, I trained on and ferried from USA the first Company Citation in 1975.

I became Citation training captain and carried out numerous demonstrations for potential customers including Bernie Ecclestone, Laura Ashley and various Air Marshalls. I also accompanied Sir Arthur and Lady Marshall on a number of their holiday and business flights.

Made a Hercules Captain in 1976, I flew a number of interesting trials including the fuselage stretch modifications and the in-flight refuelling programme for the Falklands war, carrying out the first flight of the C130 tanker.

I was the first Marshall pilot to probe a Hercules against another C130.

I took an active part in the flying club and among my students were Lord Mountbatten and the Hon. Timothy Knatchbull, Earl Mountbatten’s grandsons plus the noble Lord Bristol.

When Doug Page retired in 1985, I was appointed Marshall Chief Pilot with responsibility for all company flying. During my twelve years with the company, I flew approximately 5500 hours on 20 different types of aircraft.

In 1987, after much consideration, I felt it right to leave the company to work for Mission Aviation Fellowship, a Christian organization providing a flying service in third world countries.

CAMBRIDGE AERO CLUB
After eight years of mission flying, I returned to Cambridge in 1995 and recommenced instructing with the Cambridge Aero Club.

This continued until retirement at the end of 2011 when I reached the age of  75.

During this period I flew a further 1000 hours, reaching a grand total of over 5000 instructional hours with the club, meeting many great people and thoroughly enjoying most of it.

All together in 56 years of professional flying I have flown 12,750 hours on over 50 types of aircraft.

My long association with the Marshall Company has been an enriching experience for which I am grateful.