Nearly £2500 was raised earlier this month after an artist - who has received care from the Arthur Rank Hospice - organised an exhibition and auction. 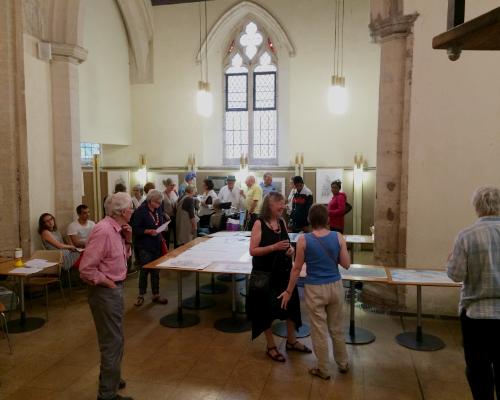 Sculptor Douglas Jeal, who was diagnosed with Motor Neurone Disease four years ago, works now predominantly with paint as a result of his condition. His submission of works included charcoal, chalk and screen print works and were given in support of what he describes as ‘tremendous’ care from the Cambridgeshire hospice. Alongside his pieces, were works donated by other artists including pieces in conte crayons by John Holder, collages by Hannah Webb, etchings and ink life drawings from Jim Butler and sketches by Jon Harris.

Dr Lorraine Petersen, Clinical Director at the Arthur Rank Hospice Charity, said: “We are indebted to all of the artists for making their work available for auction. Douglas has been a patient here for the past few years, and the most important thing to him was to keep on working. Everything we have sought to achieve is focussed around him continuing doing what he loves, which is his art, so I am absolutely delighted that Douglas has brought his ideas of an art exhibition and auction to life and that it has been so successful.”

Every year the hospice must raise at least £1.5m to continue providing specialist end of life care, free of charge to Cambridgeshire patients. Alongside the ongoing work, a new £10.5m facility is currently in construction to replace the Mill Road site and meet the growing need for palliative care in the county.