The Møller Centre, Churchill College continued its partnership with Shanghai Jiao Tong University (SJTU), one of the oldest higher education institutions in China, by delivering another leadership programme to around 50 Chinese CEOs and entrepreneurs as part of their 2015 Global CEO Programme which focused on science and technology. 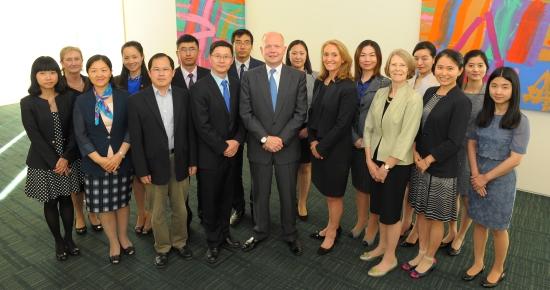 SJTU is known as “The Oriental MIT” and is recognised as one of the “Top Four” in the China National Universities Ranking, its 2015 programme focused on how research and innovation within science & technology has become an integral part of our lives.

Gillian Secrett, CEO at The Møller Centre explained, “We are very proud to have been working in partnership with Shanghai Jiao Tong University on The Global CEO Programme for the last three years.  In that period my team have designed, organised and delivered a series of leadership programmes to support over 150 CEOs and successful entrepreneurs who lead influential Chinese private businesses, many of which have annual revenues of over USD$5 billion.  The focus this year was on science and technology, which is particularly relevant to us at Churchill College with our strength in mathematics, science and technology. I was delighted that Professor Sir John Gurdon, Honorary Fellow of Churchill College and Nobel Prize winner was able to share his incredible story with the group from his early inspiration to be a scientist through to his current research and how this will change our lives in the future.   Our programme was designed to deliver maximum impact for Chinese business leaders back in their workplace, help them face the dynamic changes of the world economy and prepare them to invest globally.”

William Hague spoke to the group about his views on China's place in the world, global issues and the Anglo-Chinese relationship.  Discussing the next focus for China after recent rapid economic growth, he commented, “ The world will be less stable in the next twenty years than it has been in the last twenty and the world will look to China to make a bigger contribution diplomatically, financially and militarily in the future.  For example, we will need to increase co-operation against common global threats  such as climate change, terrorism and cyber crime.  The latter will become a more serious problem with the growth of The Internet of Things and together we need to fight this.  The UK and China are well suited to develop our already strong relationship to benefit each other.  China can benefit from what the UK has to offer - the best education in the world, the best hi-tech innovation and deep expertise in areas such as climate change and the UK can benefit from what China can offer - markets and access to capital.”

SJTU runs more than 30 open programmes and has developed various bespoke training courses focusing on executive education and collaborating with world renowned universities and institutions.   The Global Leaders Programme is run with The Møller Centre at Churchill College, the School of Continual Education at Oxford University and UC Berkeley HAAS Business School in California.

The Møller Institute at Churchill College in the University of Cambridge provides space and context for the development of current and future leaders in government, industry, academia and civil society. ...