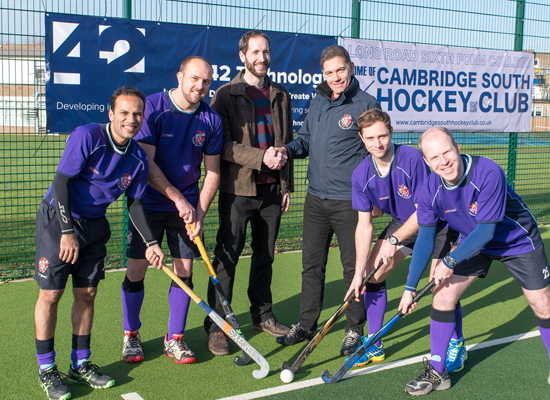 Local engineering and product development consultancy 42 Technology has signed a new sponsorship deal with Cambridge South Hockey Club that will enable the club to establish its first junior section for children of ages seven to 12.

Despite the increasing popularity of hockey within Cambridge and with hundreds of youngsters playing both with their schools and with town clubs, Cambridge South has only ever had space in its league teams for juniors over the age of 13.  But that is set to change and the new junior section is going ahead thanks to 42 Technology’s sponsorship and because the club has now found a permanent home at Long Road Sixth Form College’s new artificial hockey pitch.

“Starting out in the sport can be a daunting experience for young novices, who can find themselves playing alongside other children who already have years of experience and professional coaching,” said John Greaves, the club’s chairman.  “Our approach is all about focusing on the fun and enjoyment of participation in the sport and allowing youngsters to develop in their own time, whether they have previously had the opportunity to play hockey or not.”

Jon Spratley, director at 42 Technology said: “Cambridge South Hockey Club is the first organisation to benefit from 42 Technology’s new sponsorship programme, which was launched earlier this year.  Our funding will help pay for equipment, coaching and other fees and we hope will inspire more young people to get actively involved in sport, as well as other local community activities.”

The new youth section will train weekly on Saturday mornings, starting in time for the new school year and hockey season in September.  If you’re interested in getting involved in junior hockey, then please contact Neil Sneade (juniors@cambridgesouthhockeyclub.co.uk).

Image: Jon Spratley, director of 42 Technology (on the left) with club chairman John Greaves and surrounded by players from the club’s first team.