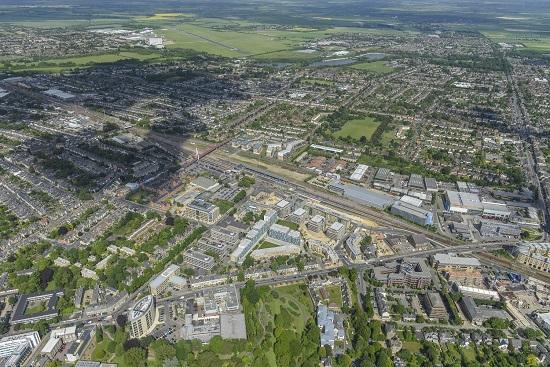 The data, which covers all 22,000 companies registered within 20 miles of Cambridge, also shows that the number of scientists employed in research laboratories and universities grew by nearly 10% in 2014/15. And these growth rates do not include the impact of AstraZeneca and other new arrivals, whose local employment data is not reported.

The fastest growing sectors in 2014/15 were construction and utilities, and property and finance, where employment grew by 23% and 18.5% respectively. However, this was after contraction in previous years due to the relatively volatile nature of the sectors.

By contrast, the knowledge intensive sectors of computing, life sciences, research services and high-tech manufacturing, which make up 30% of employment and 33% of turnover, have grown steadily over the last four years, with a compound growth rate of turnover of over 7.9% per annum to £11 billion and employment growth of 4.5% to 58,000.

What is striking about the data is that 2014/15 was just another typical year judged on Cambridge’s recent performance. Over four years (2010/11 to 2014/15) the turnover of Cambridge companies has grown by 31%, employment by 26% and the number of companies by 25%.

The new data is being released by Cambridge Ahead, working with Dr Andy Cosh at University of Cambridge’s Centre for Business Research, and includes the sector, principal trading address, turnover and employment record of Cambridge-based companies for the five years to April 2015.

The eight partners who contributed to the project include Cambridge Network, One Nucleus and SQW.

The data contains some details of the 933 companies that have opened trading or research offices in Cambridge, from national retailers like John Lewis and Marks & Spencer, and banks such as Barclays, to international technology giants like Siemens, Thales, Oracle, Apple, Amazon, Hewlett Packard, Sony, Schlumberger, and GlaxoSmithKline. The names, sectors and postcodes of these companies are shown, but not their employment or turnover.

Several of these international companies have also bought Cambridge companies and gone on to grow their operations further in the area, because they see Cambridge as a unique economy in Europe.

Matthew Bullock, Master of St Edmund’s College and Chairman of the Cambridge Ahead Growth Project, said, “This really is a new data resource that anybody can explore. We would like to encourage everyone living in the area who is interested to get to know about this economy of ours: in your postcode, in your sector and in the companies and the laboratories around you, we are creating a new Cambridge.”

Ian Mather, Chairman of Cambridge Ahead, added: “For the first time we have reliable data on the growth of Cambridge companies.

“The annual revenue growth rate of 7.7%, excluding growth generated by entrants such as AstraZeneca, underscores the value of Cambridge to the global economy. If this level of growth is to be maintained then considerable investment in housing and transport is essential.”

The data is being made publicly available soon via a website, www.camclustermap.com. This will enable companies and individuals to search by individual businesses or postcodes, as well as by sector, size and growth rates.

Academics, economists and other interested researchers will be able to gain access to the underlying raw data on request, via a dedicated page on the Cambridge Ahead website.

The data includes turnover and global employment figures for all companies registered with a principal trading address within a 20-mile radius from Cambridge, plus employment in all the research laboratories and universities in the area. It does not include employment data for sole traders, some elements of the public sector, and employees of the national and international companies with trading and research offices in Cambridge.

Cambridge Network Director and serial entrepreneur, Dr David Cleevely CBE, said: “The new map shows for the first time the breadth and depth of the Cambridge economy. It is an amazing resource for anyone who wants to know what is going on across the Cambridge Region and to explore this economic powerhouse which is driving such phenomenal growth. More people need to understand the size and importance of the Cambridge Region  - this map brings it to life.”

About the Centre for Business Research

The Centre for Business Research (CBR) is a research institution within the University of Cambridge which conducts interdisciplinary research on enterprise, innovation and governance in  contemporary market economies. Established in 1994, it is now one of the leading centres for social science research on economics, law and business in the UK, and has a growing European and global reputation. For more information, please visit  www.cbr.cam.ac.uk

Posted by Cambridge Ahead

Cambridge Ahead is a business and academic member group dedicated to the successful growth of Cambridge and its region in the long term. We aim to represent the city’s business community by offering soundly-based opinion and advice to local and national governments about the opportunities and needs ...