Life goes on after Ebola 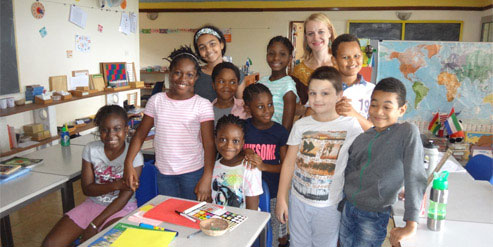 Sierra Leone has finally been declared free of Ebola, a year and a half after the virus first affected the country and went on to cause more than 3500 deaths. The World Health Organization estimates that, in total, the epidemic has infected almost 30,000 people across West Africa and killed at least 11,000.

It has been an extraordinary period in Sierra Leone’s history, and the deadliest outbreak of Ebola since the disease was first identified in the region in 1976. Whole districts were quarantined and aid was flown in from across the world. Schools were closed for several months. Jenny Condron, Principal of the International Montessori School, a Cambridge school in the capital, Freetown, says that the rate at which Ebola spread was a shock to everyone. “On 23 March 2014, a parent sent me a text message to say that there was an outbreak of Ebola on the borders of Sierra Leone and Guinea. Later that day I contacted a parent who was working with UNICEF. She confirmed that it was early days yet, and since Médecins Sans Frontières was already on the scene there was no need to panic.

"But we all underestimated how quickly the virus was going to spread. When I heard that Dr Sheik Humarr Khan [a well-known expert in tropical diseases] had died and other health workers were also becoming infected, it finally began to sink in that this was not going to be an easy disease to discard."

The school managed to stay open until the end of the academic year in June 2014, but in July the Sierra Leonean government ordered all schools to remain closed until the country was declared free of Ebola. Jenny adds: "I was disappointed and at the same time scared for my family – and also scared that one of the pupils might become sick. Even so, we all thought this would end by December 2014." But the school did not reopen until well into the following year.

It was a similar situation for another Freetown Cambridge school, The KidZone Academy, which closed in June 2014 and reopened in April 2015. The school’s Director, Mantie Cole, says: "We felt very sad for the children, especially since our very first enrollees who started with us in 2010 had just graduated from kindergarten. They were just getting ready to be the first batch to open up the Cambridge Primary programme for our primary school."

An eerie silence descended on the schools during the closure period. Both Jenny and Mantie stayed in touch with parents via email and Jenny sent out links to educational resources. A few students at both schools had one-to-one tutoring – and some pupils with dual nationality were able to continue their education abroad. Mantie says: "It was very silent during this time. Everyone was scared." However, The KidZone Academy did make use of the closure to spend three months on professional development so they were more than ready to reopen. "We did not just sit there waiting and doing nothing," Mantie adds. Thankfully, to Jenny and Mantie’s knowledge, no families of pupils or staff were affected by Ebola. But getting back to normal has not been easy. Mantie says: "When we reopened in April 2015, there was very slow enrolment at first and most were new students. Parents wanted to see the sanitary and hygienic measures we had put in place to feel confident in bringing their kids to our school. As the weeks rolled by, attendance increased as parents felt more confident."

Jenny says students were excited to see their friends again when school eventually reopened in August 2015, but the joy was a cautious one, and tempered by far-reaching effects of the outbreak on the country’s young people. "Ebola caused a lot of children in Sierra Leone to lose their parents or guardians, family members and friends. Psychologically speaking, it was traumatic. And, naturally, not having any access to education was going to lead to children being idle and losing motivation, as they would have had little or nothing to do. With all this going on it was evident that a return to educational normality was going to be a big hurdle."

Now it’s a case of making up for lost time. Jenny says: "Before we officially reopened, on 31 August, I organised teachers to come in during July and August to work with those children who’d had no access to formal teaching at all during the closure period. Now, we have added an extra hour to the school day to enable us to fill in any gaps in their knowledge. The children have really worked hard and we are beginning to see a lot of progress."

Mantie adds: "We are managing. One area we are having trouble with is mathematics, as the children are struggling to catch up with what they have missed. But our staff are committed and everybody has gone above and beyond to ensure that we bring the kids up to speed."