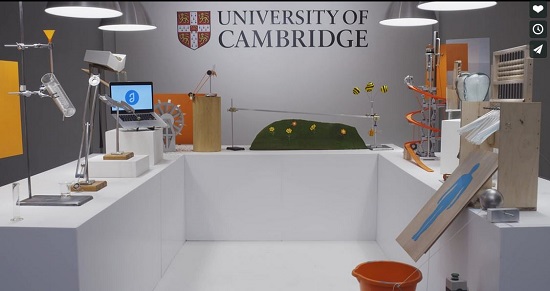 The Cambridge Enterprise film, #nextgreatidea, was awarded gold at the EVCOM Screen Awards 2016, held at Lindley Hall in Westminster.

The film, which was launched in November 2015 to showcase some of the world-changing ideas Cambridge Enterprise (CE) has supported on the journey to market, won top honours in the 'Brand Communication' category, ahead of films produced for Jaguar and Atelier Nespresso, among others.

EVCOM, the Event and Visual Communication Association, are the official voice of the live event and visual communication industry in the UK, comprised of a wide variety of leading professionals, agencies, freelancers, production companies and suppliers. The EVCOM Screen Awards, formerly the IVCA Awards, are considered among the most prestigious awards in corporate film and visual communications.

CE’s video, produced and filmed by Contra Agency, used a bespoke ‘Rube Goldberg’ machine to take viewers beyond the licences, patents and investment that are central to Cambridge Enterprise by illustrating the impact of commercialising University research.

“We set out  to make a film that would both get people’s attention and communicate our message. So we are delighted to have received this professional recognition that we have achieved this with the EVCOM Award against competition representing leading household brand names. Our congratulations to Contra Agency for their exceptional work,” said Tony Raven, CEO at Cambridge Enterprise.

John Ford, Head of Film at Contra said “we love it when our clients ask us to create something a little bit different. That’s where this film came from – a desire to communicate the message of Cambridge Enterprise in an innovative way. We are delighted to have won the award for best Brand Communications, beating brands such as Jaguar and Nespresso. It’s a great result and we’re proud to have had the chance to work with Cambridge Enterprise on this very exciting project!”