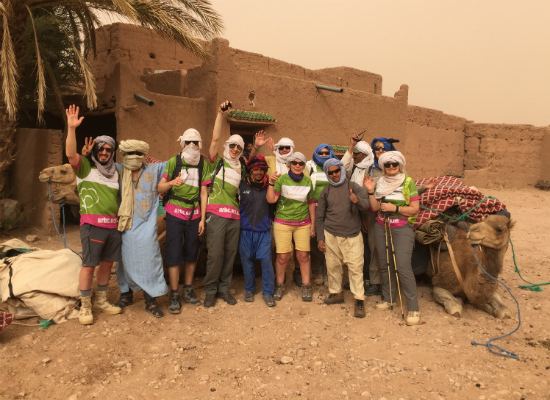 Eight intrepid members of #TeamARHC who took on a challenging 70km trek across the Sahara last month were invited to join three others from the 2014 expedition recently, for a special reception at the Mayor of Cambridge’s Parlour.

As well as being treated to a tour, drinks and nibbles, the Charity was delighted to announce that £21,291.63 has been raised from this year’s efforts, bringing the Charity’s Sahara trek grand total to over £26,675.84.

The intrepid team left Cambridge for Morocco on Thursday 17 March and having traversed the Atlas Mountains, began their long, hot, shower-less, camel-accompanied journey the following day. The team were forced to push on through a sandstorm on the penultimate day due to an incoming and notoriously unpredictable sandstorm, which may have otherwise forced them to stop in their tracks. As a result the team walked a further 4km than had been planned for the trek, yet finished a day earlier!

Lynn Morgan, CEO of the Arthur Rank Hospice Charity, who was one of the eight Sahara trekkers, says: “One of things that struck me most, was the sheer size and emptiness of the desert and the amazing landscapes. Sometimes the dunes looked really challenging, but the views from the top made the struggle worthwhile. It was great to finish walking in the later afternoon, sit down (no seats of course) and have that first cup of mint tea – better than a glass of wine at the end of a week’s work!”

Luke Upshall, IT project support officer for the Charity comments: “The first night I sat on top of a tall sand dune, watched the sunset, looked out across the desert and couldn’t believe I was there! Another day we got up early to climb one of the many mountains of the desert; there were clear blue skies and the sun was beating down on us whilst we climbed these huge dunes of the mountain. Once at the top you could see how vast the desert really is and it was rewarding looking back to where we had started from. We completely bonded as a team and felt a great deal of emotion once we finished, knowing we did it together.”

He adds: “I never thought I would even consider doing something like this, but it really opens your mind to see more of the world. How many people can say they trekked 70km and camped in the hottest desert in the world?! If anyone ever hands you such an opportunity just do it, especially if it’s for an amazing cause like this!”

Hospice at Home Nurse for Arthur Rank Hospice Charity Clare Kitchener, Tom Lee (Comberton) and Trevor Turner (Duxford) who took on the same trek in 2014 also attended the Mayor’s Thank You reception. Arthur Rank Hospice Charity would like to add its heartfelt thanks all its Sahara trekkers and #TeamARHC members, alongside those who have supported them in their training and fundraising endeavours.