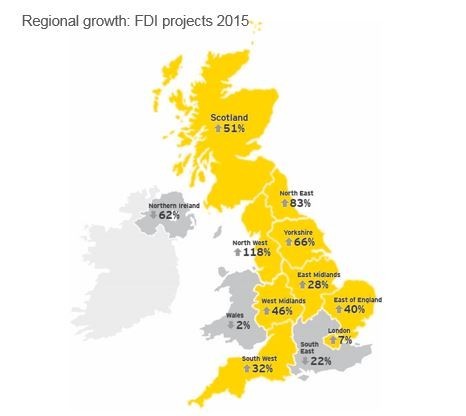 The East of England recorded 21 foreign direct investment (FDI) projects in 2015, which is an increase of 40% on 2014 when the region attracted 15 projects. This represents the strongest performance seen in the region since 2008.

Investment into the East was led by Cambridge with nine recorded projects, the joint 9th most successful city in the UK (outside of London) for attracting FDI.

When employment secured from FDI is considered, the East recorded 567 jobs in 2015 – up 20% on 2014 employment figures when 471 jobs were created in the region.

Nick Gomer, managing partner at EY in Cambridge: “2015 has been another year of growth for the East of England, demonstrated by a 40% increase in FDI performance. Cambridge attracted nearly 50% of the total number of projects recorded in East Anglia in 2015.

“The region has seen sustained performance over the last decade – both in terms of attracting new investment projects and creating more jobs – which demonstrates that investors continue to see Cambridge and the wider East region as an attractive destination for foreign investment.”

The UK’s growth was driven by significant gains in the regions and cities outside of London and the South East. The North West led the way out of 12 UK regions, with an increase in projects of 118%, contributing to a 127% growth in FDI levels across the Northern Powerhouse, since the term was coined two years ago.

Only three regions saw a decline in projects secured during the year – The South East of England (22% fall), Northern Ireland (62% fall) and Wales (2% fall).

Nick Gomer continues: “2015 was indeed the year of the UK’s regions and cities. The geographic mix of inward investment last year strongly suggests that the UK is using FDI very effectively to help rebalance its economy, with almost 90% of the UK’s total FDI growth coming from the regions outside of London and the South East.

“Investors are voicing solid support for the UK’s agenda to devolve power to a regional level, it now seems devolution is starting to work and foreign investors are helping rebalance economic activity more evenly across the country.”