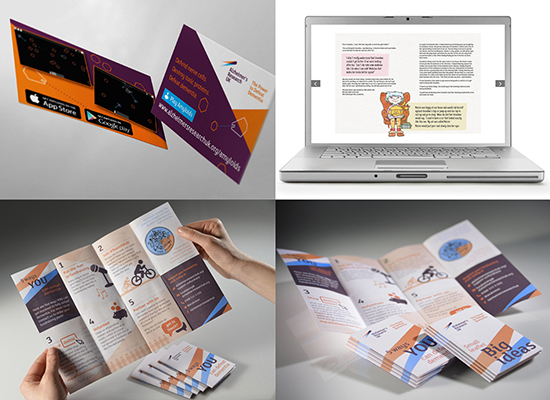 D&A Creative continues to work with the team at Alzheimer’s Research UK on a range of marketing projects.

D&A Creative, based just outside of Cambridge, continues to work with the team at Alzheimer’s Research UK on a number of varied projects and was recently asked to design and print an all purpose leaflet to introduce the charity and what they do to a general audience. The team came up with a small A7 format, folding out to an A4 sheet. The 16pp gave some general information about dementia itself, the work of Alzheimer’s Research UK and what they have achieved. An infographic design for the leaflet was chosen, making the information visually interesting and easy to read.

Following the success of the leaflet, the initial print run of 2,000 copies was followed up with a 5,000 reprint. D&A has since gone on to create a second fundraising version of it, illustrating five different ways supporters can get involved in the fight against dementia from fundraising, to volunteering and partnering.

D&A Creative has also completed the design and print of some promotional cards to market an interactive online game – Amyloids. And worked on the design and layout of the online children’s book ‘When Grandma Came to Stay’ which is part of the recently created children’s section of the Alzheimer’s Research UK website. You can read or listen along to this story of a young girl who has to deal with some unusual situations when her grandma who has dementia moves in, with the story narrated by Edith Bowman.

For more information on the work of Alzheimer’s Research UK visit www.alzheimersresearchuk.org

We are a multi-discipline graphic design agency based in Cambridgeshire. We listen, we learn our clients’ business and using creative yet pragmatic thinking, we deliver targeted, memorable and effective work for them.