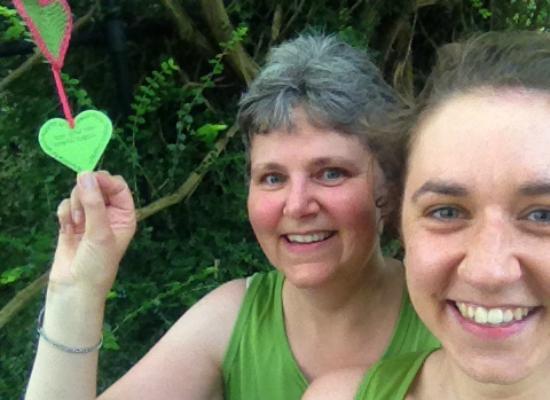 To celebrate her 50th birthday, 25th wedding anniversary and to mark that she is now five years post-cancer treatment, Chris Barker decided to embark on a ‘50 x 5k’ yarn bomb challenge.

Chris who works full time for the Arthur Rank Hospice Charity as the Administrator for Hospice at Home, came up with the idea last year and floated the idea with the fundraising team in February. She says: “I wanted to do something a little bit different to celebrate these significant anniversaries in my life, whilst raising money for two causes close to my heart. I did a bit of searching on the internet for ideas before coming up with the 50 x 5k Challenge and set myself a target of 75 days to complete 40 5k runs and 10 5k walks. I’ve always wanted to try a bit of yarn bombing so when I saw the ‘Love Your NEW Hospice appeal’ launch it tied in really well. It was very exciting when the first tweet arrived and I did become a little obsessive about checking Twitter for updates!”

Chris began her mission with her first 5k run around Soham on the evening of 18 April, leaving her first knitted yarn bomb heart at Kingfisher Drive with a special hand-crafted tag requesting that the finder tweet where it was discovered. Her quest to spread the word about the Hospice’s new build project saw her do early morning and late evening 5k’s all over the county, taking in landmarks such as King's College and Cherry Hinton Hall, Lode Mill and Burwell Windmill, Wicken Water Pump and Bottisham Lock.

Tweets from various locations were quick to pop up on the @ArthurRankHouse Twitter feed, tagged with #LoveYourNEWHospice, alongside lovely comments from each person who found one of the cute 3 x 3 inch knitted hearts. Examples include: Natalie Fenn who posted a photo alongside ‘Spotted this little gem at the science park’; Megan Croot tweeting: ‘Found this down by the river in Ely this evening. Made me smile!’; Mia Dunderdale: ‘Found this beautiful thing whilst out running this evening in Soham’; and seven year old Henry found one almost as soon as it had been left at the water pump in Histon, later using it for a show and tell session at school.

Family, friends and other Arthur Rank Hospice team members joined Chris on a number of her 5k routes as she ploughed on with her ‘50 x 5k’ mission, with a fellow Hospice at Home colleague joining her on a run from the new Hospice’s home at Great Shelford - where they had just attended a site visit for staff - back to the Hospice’s current Mill Road location.

Chris’ final 5k run took place on 27th June, three days before her birthday, bringing her full circle back once more to the Mill Road Hospice site. She and her colleague Anna Riglin (Central Referrals Officer) placed the yarn bomb heart in the Day Therapy garden where it was later discovered by her colleague Pat White (Senior Administrator). When asked about what was most difficult about her personal challenge Chris adds: “Trying to squeeze the runs in to general life which has resulted in a few early mornings, with my record being a 4.30am start at Wicken Fen, but there was the reward of a beautiful dawn chorus and sunrise.”

As well as having raised £630, which will be directed towards Arthur Rank Hospice Charity’s £10.5 new build as part of the ‘Love Your NEW Hospice’ appeal, Chris has additionally raised £590 for the Alzheimers Society, taking her combined fundraising total to £1,220: over 400% higher than her initial fundraising target of £300! Her donation page will be open until 24 August and can be found at https://www.justgiving.com/fundraising/Christine-Barker50x5