Foam-filled fun at the region's first ever Bubble Rush

Around 650 people turned out and were covered head to foot in colourful bubbles at the inaugural Bubble Rush 5k, fundraising 5k for Arthur Rank Hospice Charity and Huntingdon Gymnastics Club, which took place at Riverside Park in Huntingdon on Sunday. 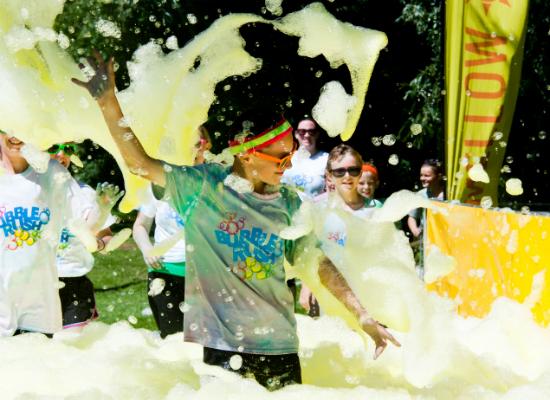 Tasha Auburn, Events and Marketing Officer at Arthur Rank Hospice Charity comments: “Six hundred and eight people had pre-registered for our fun run and encouraged by the glorious sunshine and friends and family, another 50 or so signed up on Sunday! We are delighted with the success of this first year and the fact that, everyone including mums, dads, their children, grandparents, colleagues, groups of friends, a line dancing group and even the Deputy Mayor and Mayoress of Huntingdon, Cllrs Jay and Sonia Dyne, took part. We have had nothing but positive feedback from our participants and – as you can see from the photos – it was a gloriously colourful and bubbly affair!”

Donna Talbot, Director of Fundraising and Communications at Arthur Rank Hospice Charity, adds: “Bubble Rush is a really fun family friendly event so it seemed a wonderful opportunity to partner with Huntingdon Gymnastics Club to bring this hospice led fundraiser to our county. With everyone saying that they cannot wait to do it again next year, we are delighted that it looks like the event will return in 2017. It is challenging launching a new event and it is always a leap of faith in year one but we are thrilled to have been able to deliver a 5k with a foamy difference.

"We’d like to extend a big thank you to all those who took part, along with: race number sponsors Cambridge Networks; Huntingdon District Council who kindly worked alongside us to enable use of the Riverside Park, Tubby’s catering and Frank’s Ice’s who kindly donated contributions from their takings; Extreme Adventure who did a sterling job of managing the event safely and ensuring the day was sufficiently foam-filled; the many volunteers who helped us with marshalling and registrations; the local residents for making us so very welcome; and of course, the Deputy Mayor and Mayoress for their support both before and during the event. We’re looking forward to building on the success of this first year and hope that perhaps double the number of ‘Bubblers’ might join us next year!”

Funds raised from the event are still being counted, with registration fees and sponsorship contributing to the overall total. The charities are encouraging those who took part to send in their sponsorship by the end of September, so the grand total raised can be announced later this year.