Builders get on their bikes to raise funds for the Hospice they’re building!

Two of the building contractors who have been involved with the construction of Arthur Rank Hospice’s new state-of-the-art home will be swapping steel toe-capped boots and hard hats for pedal clips and cycling helmets as they take on the Prudential RideLondon 100 mile bike ride this weekend. 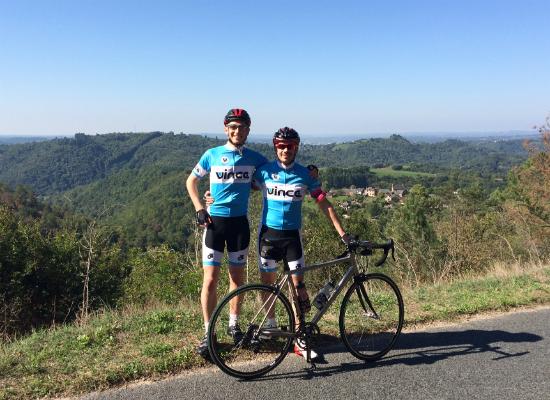 The duo from Barnes Construction – who have been working on the £10.5 million project since it first began in April 2015 – will be two of eight, representing #TeamARHC at the cycling challenge event on 31 July.

Ian Vince (Senior Design Manager, 44 - pictured right) and Alex Drouet (Assistant Design Manager, 24 - left) from Barnes Construction have been working just as hard outside the build site as on it, to raise the minimum £500 sponsorship required to take part in the ride. The team of two was originally three, until colleague Daniel Sheldrake (Senior Design & BIM Manager, 32) was forced to defer his place due to a serious hamstring injury. However, he has continued to fundraise as part of the Barnes bike team’s effort, meaning that the three have now raised £1,360 between them. They have requested that the funds they raise be specifically directed to the new hospice building.

Ian says: “Obviously it’s a great shame that Dan won’t be riding with us after all the effort that he has put into his training over the last few months, however these things happen and I know he’ll be with us in spirit. The work that the team at Arthur Rank Hospice does is of incredible value and, although it is a service that none of us wish to call upon, it is great to know that we are doing our bit to help ensure their important work can be sustained going forward within the new hospice building.”

Alex adds: “The challenge will certainly be keeping going for the entire distance. The furthest I have cycled previously is around 70 miles but I’m really looking forward to taking on 100! I’m delighted we have been able to raise money for such a worthy cause and knowing people have invested in us and the hospice will give me the motivation to complete the bike ride.”

The men have stuck to a strict training regime involving two rides of between 25 and 60 miles a week over the last five months, so will be ready when they pedal across start line on Sunday at 7am from Queen Elizabeth Olympic Park in London. The route takes them through the capital past Canary Wharf, through Piccadilly and Hammersmith, across the River Thames and Hampton Court Bridge, then takes in some beautiful green Surrey countryside, climbs the infamous ascent at Leith Hill before winding back into the City for a big finish on The Mall.

Amy Bidwell Community & Challenges Fundraiser for the Arthur Rank Hospice Charity, says: “We are thrilled to have eight from #TeamARHC taking part in this cycling challenge and it’s so brilliant that Ian, Alex and Daniel - who will have seen the construction of the new hospice from start to finish - have thrown themselves into our fundraising plight for the £10.5 million building. Having worked alongside us for some time now, they certainly appreciate how crucial this sort of support is, and I know they will be proud to represent both us and Barnes Construction on the day. We wish Ian, Alex and all of #TeamArthur taking part in Prudential RideLondon this Sunday, the greatest of luck and hope you get the opportunity to cheer one another around the course!”

If you would like to sponsor Ian, Alex or Daniel or to discover more about any of Arthur Rank Hospice Charity’s Prudential RideLondon cyclists please visit http://www.arhc.org.uk/ridelondon.asp