The Cambridge Roar raises £16,000 for Arthur Rank Hospice as support is extended until 2018

The Cambridge Roar Festival has raised £16,000 for Arthur Rank Hospice Charity! As the amount was announced, it was revealed that both The Cambridge Roar and Quy Mill Hotel have chosen the Hospice as their charity of choice until the end of December 2018. 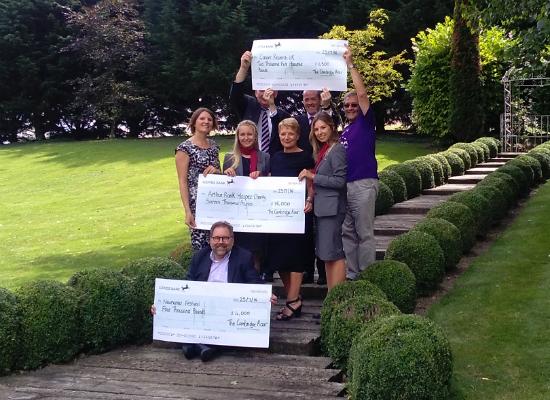 The Cambridge Roar is a festival of ten events over ten days, which took place this year from the 22nd June – 2nd July 2016, at Cambridge Quy Mill Hotel. The diverse and sparkling events were as much about having fun as fundraising for the chosen charities. Events on offer included everything from a Sporting Heroes Dinner to a Final Furlong racing event, a Catwalk Show to Afternoon Tea, and a Comedy Night to the Midas Touch Ball.

The festival launched with the aim of generating funds for charity by hosting entertaining events for the general public. Last year the 2015 total was £21,500 and in 2016 the Roar is thrilled to announce it has now raised an amazing £27,500 for its three nominated charities (Arthur Rank Hospice Charity, The Princes Trust and Cancer Research UK) and the Newmarket Festival, collating to a grand total of £54,000 raised since the Roar started in 2014. Alongside the Quy Mill Hotel’s contribution, a staggering £66,000 has now been raised for the nominated charities within just two years!!

The Cambridge Roar is the brain child of Tony Murdock, General Manager of the Quy Mill Hotel and Chairman of the Cambridge Roar. He comments: “I am delighted that Roar 2016 has raised funds to support three very worthwhile causes and the Newmarket Festival. We are so grateful to all the businesses and individuals that sponsored our events and bought tickets, helping us to reach our fundraising goals. We are thrilled that the Roar Marquee will now also now be returning in September, with more exciting events.”

Jonathan Tewson, Media Sales Director for the Cambridge News adds: “It has been a privilege to be once again involved with Cambridge Roar this year. Tony Murdock and the Cambridge Roar Team at Quy Mill Hotel do an exceptional job in delivering so many diverse events over such a short space of time. The events are great fun, but more importantly raise significant amounts of monies for such worth causes. These summer events have raised £27,500 this year, bringing the total raised in two years of Roar and charitable work to £66,000 an amazing amount from Tony and his team.”

Donna Talbot, Director of Fundraising and Communications at Arthur Rank Hospice Charity adds: “We had a wonderful time supporting Tony and his dedicated team, at what was once again a fabulous and entertaining line up of events. The Cambridge Roar just keeps on getting bigger and better and is a fantastic example of how much organisations with determination and flair can achieve. The Cambridge Roar has really exceeded expectations in terms of both funds and awareness raised. Thank you to everyone who came along and please make sure you book tickets early for both September and next year, these are events not to be missed!!”

For more information and to see photographs visit: www.thecambridgeroar.co.uk