Cambridge-based developer ViewRanger has become the first hiking app ever to use the built-in GPS on Apple Watch Series 2. 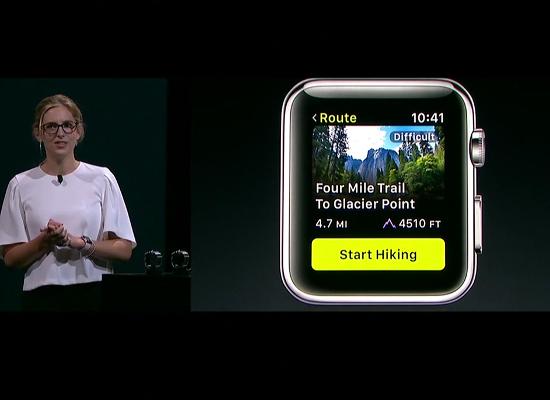 The special event yesterday (7 September 2016), is where the new iPhone 7 and Apple Watch Series 2 were unveiled for the first time to invited guests at the Bill Graham Civic Auditorium in San Francisco, plus a live online audience of millions of people around the world.

In a live stage demo (pictured above), Hannah Catmur took the audience on a virtual hiking tour of Four Mile Trail in the USA’s Yosemite National Park, with the ViewRanger app providing turn-by-turn directions and highlighting key route features such as viewpoints, camping locations, and waterfalls.

ViewRanger has completely redesigned its watch app to take advantage of the improved capabilities of Apple Watch Series 2. It uses the GPS within the watch to pinpoint your exact location on a map, allowing you to navigate with the watch independently of the iPhone. You also get a discreet tap on the wrist when it's time to make a turn, or when you wander too far from your route. And the all-new ViewRanger app for Apple Watch Series 2 also works with Apple Health, so you fill up your activity rings as you hike.

“With a quick glance at the watch, ViewRanger users can see their GPS location on detailed maps, access route descriptions, and learn interesting facts about the landscape around them,” said Craig Wareham, ViewRanger co-founder and CEO.

In combination with the cutting-edge technology of Apple Watch Series 2, ViewRanger delivers hands-free route details and stats directly to outdoor enthusiasts without the need to pull out their iPhones. Plus, the app running on the Apple Watch Series 2 will instantly link into ViewRanger’s time-tested mapping technology and active outdoor community.

“This new watch app is the latest in a line of innovations that ViewRanger has brought to the outdoors market – and we’re not finished yet,” Wareham added. “Our team in Cambridge is currently completing our breakthrough augmented reality technology that will allow people to explore the world like never before.”

ViewRanger is fully compatible with the new iPhone 7 and works offline providing access to high quality mapping without a mobile or data signal. This makes it the ideal app for anyone exploring the great outdoors using Apple’s new devices.

Download the free ViewRanger app from the Apple App Store. ViewRanger for Apple Watch Series 2 will be available as an upcoming app update later this month.

More information can be found at www.viewranger.com, or download the media kit from http://bit.ly/ViewRangerMediaKit

Outdooractive is the world’s leading digital platform for outdoor adventure, a virtual home for all outdoor enthusiasts. With our solutions we support people in living an active lifestyle. We encourage them to explore the great outdoors and inspire moments of connection in nature. In late 2019, ...