All girl team in training for five months in the Antarctic 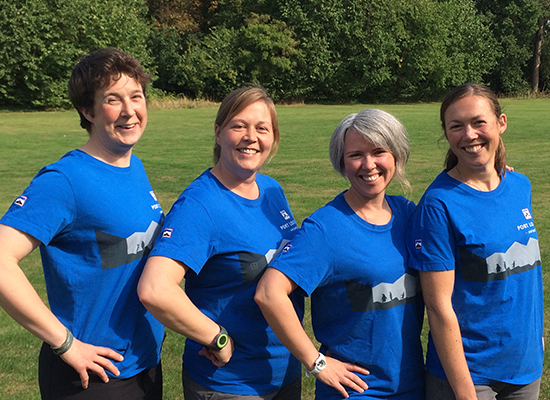 The 2016/17 successful team of four unite for an intensive week of training prior to five months living and working at Port Lockroy on the Antarctic Peninsula.

Each year, the United Kingdom Antarctic Heritage Trust (UKAHT) send a team of four to live and work on Port Lockroy during the Austral summer (November – March). To prepare the chosen team for life on the world’s harshest continent, the UKAHT organise a training week each year.  Held at Girton College, Cambridge the week is an opportunity for the team to get to know each other as well as prepare for five months living and working in a historic site and penguin colony on the Antarctic Peninsula – learning everything from first aid and fire safety to running a post office, wildlife surveying and historic artefact conservation.

Port Lockroy is a destination for many around the world wishing to experience and learn more about the early days of British science and exploration in Antarctica.  Situated on Goudier Island, Port Lockroy has been home to explorers, whalers, scientists and sailors, all of whom have made vital contributions to Antarctic history.  This sheltered island, off the coast of Wiencke Island, at the meeting point of three seaways, offers some of the most dramatic mountain and glacier scenery on the west side of the Antarctic Peninsula and as such has become the most visited site in Antarctica.

Approximately 18,000 visitors will visit Port Lockroy on board expedition vessels, which tour the region throughout the season. Part of the team’s role will be to welcome these visitors and give them an insight into life on a scientific base in Antarctica in the 1950s. The team will be responsible for the care and maintenance of the museum and overall site, as well as monitoring any impact on the local wildlife, which includes carrying out surveys of the resident gentoo penguin colony.  In accordance with the Antarctic Treaty, they will also ensure strict guidelines on the care of the environment are adhered to.  The UKAHT also run a post-office at Port Lockroy on behalf of the Government of the British Antarctic Territory, from which 80,000 cards are posted each year for delivery in over 100 countries.  Management of the post-office falls under the responsibility of the team whilst they are there.

This year’s successful candidates are:

The training week prepares the team for the season ahead, with experts in every aspect of life in Antarctica sharing their experience and expertise.  The diverse programme included a session on the Antarctic Treaty – the international perspective, delivered by the Foreign and Commonwealth Office Polar Regions Department; an introduction to British Antarctic Survey (BAS) wildlife monitoring and environmental data collection lead by a penguinologist from BAS, artefact handling at the Scott Polar Research Institute and interactive role play to help the team deal with the variety of situations that could arise when living in one of the most isolated places on Earth.

Camilla Nichol, Chief Executive, UKAHT commented: “Our training week is an ideal opportunity for the team to really get to know each other and us them, whilst at the same time learning all they need to know about Port Lockroy including how to cope with the environment, respect the wildlife and undertake the tasks we ask of them safely and responsibly. Our objective is not only to make sure that the team are confident in their abilities to deliver an unforgettable experience to the thousands of visitors they will meet during the season, but also to ensure that their experience living in this most remote place, is memorable and enjoyable.”

The team will arrive at Port Lockroy in November and will be sending regular blog reports back to the Cambridge based UKAHT team, allowing the wider world to get a taste of what life is like in this most remote corner of the world. Blogs will be made available via the UKAHT website www.ukaht.org