How UK school students' writing has changed since 1980 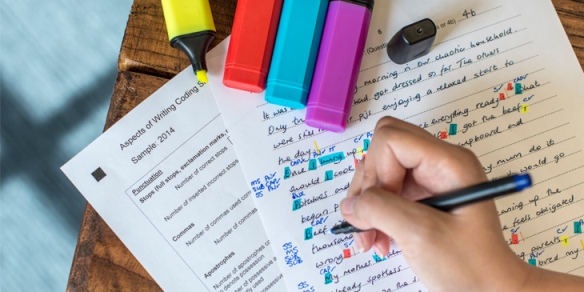 Research published by Cambridge Assessment offers a unique insight into how school students’ writing in exams has changed since 1980.

Cambridge Assessment has published its Variations in Aspects of Writing study approximately every 10 years, initially using a sample from 1980. This latest phase focuses on scripts from 2014. Key findings include:

Professor Debra Myhill, Pro-Vice-Chancellor of the University of Exeter, who reviewed the study, says it will be valuable to teachers, policymakers and researchers.

“The study gives teachers some real insights into their own students’ work. They can look at the findings – say for example how children’s punctuation use has changed – and think ‘is this true for the children that I teach’ and that helps them identify what they might focus on or draw attention to in their own teaching.

“It’s important to note that in the key findings, apart from spelling which relates to absolute accuracy, the other findings are value-neutral and need interpreting in the context of actual children’s writing. So for example, an increase in other punctuation marks could reflect greater subtlety and sophistication in children’s punctuation, or it could reflect over-liberal use of punctuation in response to a greater curriculum emphasis on other punctuation marks. The key thing is it is drawing attention to patterns that teachers may not otherwise notice in their students’ writing.

“But this study is also important for policy makers. The patterns of change or absence of change over time can indicate issues for curriculum development, or evaluate the success of policy interventions.

“For example, what this report may be highlighting is a changing pattern in terms of what happens to children below the D grade borderline. It suggests that possibly teachers are focusing their attention on the C/D borderline and children above that, whereas children who are lower are not getting quite so much attention. That would be an important implication both for policy and for practice and certainly deserves further investigation. All children deserve to have the best possible teaching of writing, no matter what their eventual outcome, and what this suggests is that possibly our weakest writers may not be getting the support that they need.

“For researchers, it acts as a springboard, suggesting new questions and new lines of enquiry. For me as a researcher, it highlights all sorts of things that I’d love to pursue. It’s very exciting to be involved in a study like this that sets new hares running.”

Sylvia Green, Director of Cambridge Assessment’s Research Division, said: “It is important to note that we report the findings with little theorising or evaluation of the education context or the reasons for data. Instead, we hope it will provide a stimulus for discussion and extended research.”