Six hundred Christmas trees were registered, collected and recycled to raise funds for Arthur Rank Hospice new home, thanks unprecedented support from the local community on the weekend of 6 and 7 January. 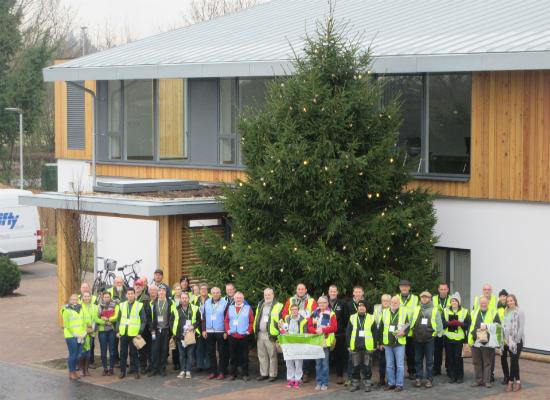 The Charity is thrilled to announce that just shy of £6000 has now been raised by the scheme in its second year, which will be directed towards the remaining £2 million needed for their £10.5 million facility.

The initiative supported by Cambridge City Council, South Cambridgeshire District Council and organised in partnership with Just Helping, saw the Hospice team up with 14 local businesses and 58 volunteers in the Charity’s second ever ‘great treasure hunt for trees’ on Friday 6 and Saturday 7 January! Six hundred registered (now redundant, unloved, unwanted, needle-dropping) Christmas trees were collected from the CB1, CB2, CB22, CB3, CB4 and CB5 postcodes. Mick George Ltd additionally donated skips to the collection effort, enabling trees to additionally be dropped off at the Hospice’s car park in Great Shelford and further boosting the numbers which could be recycled to raise funds.

The Hospice’s fundraising team are delighted with the growing success of the initiative, and hope to add further postcodes to their collection areas in future years. Community Fundraiser, Chloe Christine-Wallis said: “The phenomenal success of the scheme would simply not have been possible were it not for all of our wonderful volunteers. Companies such as Borley Brothers Ltd, Quy Mill Hotel, Sawston Carpets and Flooring Ltd, Cambridge Organic Food Co. and Marshall Motor Group to name a few, provided vehicles and drivers to help with the collection. Cambridge Vehicle Rentals also provided a number of vans across the weekend and the Rapid Relief Team kept our volunteers well fuelled by providing lunches for everyone. Members of the general public also got involved with activities such as leafleting before the event and collecting the trees, which we are extremely grateful for. Thank you!”

The Charity would like to extend its gratitude to all those companies who donated vehicles and man-power to this year’s collection, including additionally Babraham Bioscience Technologies, Barclays (Histon), Barnes Construction, Bidwells, Granta Cricket Club, Mick George Ltd, The Moller Centre and Calne Vehicle Management, as well as volunteers from their own staff and volunteer teams. ‘Life on a bike’ have already volunteered to help with the scheme next year and if you would also like to register your interest please call Community Fundraiser Bec Beattie on 01223 675885 or email bec.beattie@arhc.org.uk

Q&A with Emma Fogg, who volunteered for this year’s Christmas tree collection

Link to the Hospice: “I work for Arthur Rank Hospice Charity as a Senior HR Advisor”

Why did you decide to get involved? “I was unable to get involved in events earlier in the year due to other commitments, so decided that I would set aside some time to help with this: it looked like such a fun event last year.”

What did you enjoy most about it? “It was like a treasure hunt and on collecting one tree a neighbour asked if we could take theirs too, so we got an extra donation along the way.”

What will you remember in particular about taking part? “Darren who was part of our team would take a run up, using the tree’s as javelin’s to squeeze as many trees in our van as possible. Sometimes when we tried to throw them into the recycling pile later, they would bounce back off and land right back at our feet!”

Anything you would advise people for next year? “Bring water proof gloves as mine got a bit soggy by the end of the day.”

What was the funniest or most unexpected thing that happened? “Getting home to see I had left a trail of pine needles behind me and then finding them in my hair for the next two days!”