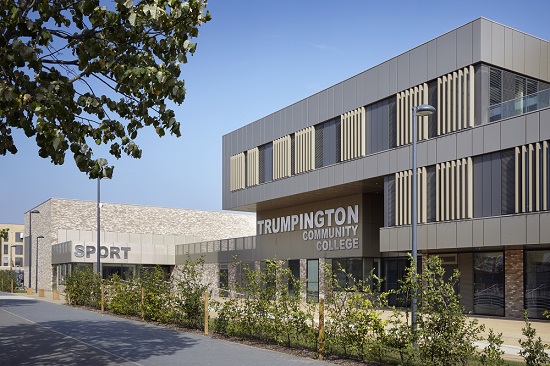 City of Cambridge Education Foundation, an education charity based in Cambridge, was commissioned by Cambridgeshire County Council to procure a design team and manage the build of the first new secondary school to be built in Cambridge City for 50 years. Now the Trumpington Community College building has been commended in the Civic Trust Awards 2017.

The strategy was to develop a building which would reflect 21st century thinking rather than historic 20th century precedents.

Innovation has been at the heart of this project, from the design of the learning spaces to the extensive use of renewable technologies.  At a time when so many schools are being built to a formula that harks back to the 20th century, Trumpington Community College is a place which reflects the latest thinking of how we will work and learn in the century ahead.

None of this could have been achieved if the client, design team and construction partner had not worked closely together at all stages, and signed up to the vision that had been developed.  As with any project there were major challenges to overcome, but the spirit of collaboration  secured a building which exemplifies the concepts of Excellence, Innovation and Collaboration.

Trumpington Community College is the first new secondary school to be constructed in Cambridge in 40 years and is the culmination of a highly collaborative process with the community and the three clients – City of Cambridge Education Foundation, Cambridge City Council and  Cambridgeshire County Council. The project consists of three components – a new secondary school, a learning support unit for pupils suffering from Autistic Spectrum Disorder and an enhanced community sports facility providing a range of indoor and outdoor spaces.

Designed around a Danish school model with particular reference to Orestad College, large proportion of open planned learning, innovative dining and hall spaces have been provided. The building is one of the key public buildings to be delivered in a new residential quarter and urban extension to Cambridge, setting the quality standard for public facilities in the area and helping to attract more families into new housing surrounding the school.

We are a cluster of five schools in the South of Cambridge with a local, national and international reputation for educational excellence. We pride ourselves on an innovative approach to teaching and learning and a commitment to high standards for all.