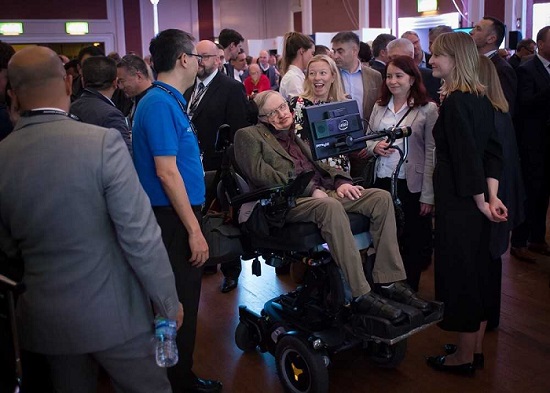 AVEVA, one of the greatest success stories to emerge from the ‘Cambridge Phenomenon’, drew its flagship customer event, the AVEVA World Summit, to a close last week. As celebrations of its 50th anniversary year near their end, AVEVA, the engineering, design and information management software leader, held the Summit at the historic Cambridge venues, the Corn Exchange and Guildhall.

Taking place from Tuesday 24th to Thursday 26th October, AVEVA, which spun out of the University of Cambridge in 1967, welcomed over 300 international delegates from 33 countries including China, Brazil, United Arab Emirates and South Africa.

Delegates from AVEVA’s key industries, including Power, Oil & Gas and Marine, were given a true Cambridge experience with a drinks reception held at the Fitzwilliam Museum on Tuesday night and a Cambridge college style Gala Dinner at the Corn Exchange on Wednesday. Guest of honour at the Gala Dinner was Professor Stephen Hawking, the eminent theoretical physicist, cosmologist and author.

James Kidd, CEO at AVEVA said, ‘I am so proud that in our 50th year we were able to bring members of our customer base to Cambridge where it all began for us. It is because of Cambridge we have been the success we are. I have had fantastic feedback on the warm reception our delegates have received locally while in Cambridge. Using venues such as the Corn Exchange and Guildhall has really helped to make this the most well attended AVEVA World Summit ever! And welcoming Professor Hawking to our Gala Dinner was truly an honour. Thank you, Cambridge!’

The theme of the event was Digitalisation; getting it right, which focused on how organisations can make the most of how they design, build and operate their facilities and ships by creating digital representations of them.  There were over 40 presentations that included keynotes from Greg Verdino, a digital transformation expert, Dave Wheeldon, Deputy CEO and CTO at AVEVA and Trond Straume, CTO Designate at AVEVA. AVEVA customers, including Boehringer Ingelheim, Statoil, AREVA Projets and Worley Parsons, also shared how they are meeting their operational and safety challenges using AVEVA software. The event was moderated by Geoff White, an investigative journalist whose work has featured on the BBC and Channel 4.

Delegates could also visit the Innovation Hub where they were able to see the application of a number of AVEVA’s technologies. This included its cloud offering, AVEVA Connect, and it’s work with Virtual and Augmented Reality that, for example, enables engineers to remotely plan and execute training scenarios while not actually having to visit the facility or ship.

Visitors to the market place on Wednesday and Thursday will have seen the Summit Makers, AVEVA employees who helped to run the event, handing out giveaways to passers-by.

Throughout the event AVEVA has used local companies for catering, transport and accommodation, further supporting the local economy.

In the coming months AVEVA will complete its merger with the Schneider Electric software business. This will create one of the world’s largest industrial software companies, being able to support the entire asset lifecycle from idea to design, operations and decommissioning. AVEVA will continue to be headquartered in Cambridge, UK.

Images (top): Professor Stephen Hawking is guest of honour at AVEVA’s Gala Dinner; (inset) AVEVA’s Summit Makers, employees of the company, were on hand to help the delegates at the AVEVA World Summit