The Cambridge Academy for Science and Technology is hosting some of the UK's leading scientists for this week's Science at 6 Lectures, as part of the Cambridge Science Festival. Tonight's Lecture will be hosted by Dr Richard Henderson, the Nobel Prize Winner for Chemistry for 2017, who will be talking on: 'Revealing the Wonders of the Molecular World.' 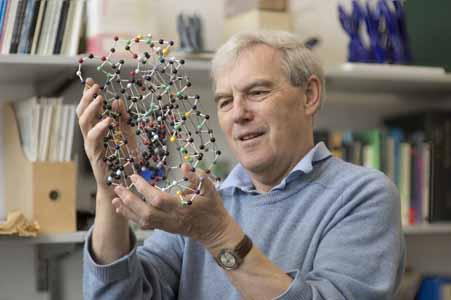 Tonight, the Cambridge Academy for Science and Technology welcomes last year’s Nobel Prize Winner for Chemistry Dr Richard Henderson - as part of the Science at 6 Lectures for the Cambridge Science Festival.

Dr Henderson, from the MRC Laboratory of Molecular Biology, is one of three scientists to have been awarded the Prize last year and one of five high-profile speakers booked for the public Science at 6 Lectures to run throughout this week, until Friday.

Booked to speak at CAST tonight (Tues 20th), Dr Henderson’s lecture is titled: “Revealing the wonders of the molecular world” and will take place in the school’s Lecture Theatre in Robinson Way, Cambridge.

Dr Henderson was awarded the Nobel Prize in Chemistry for his work developing a new method to produce images of biological molecules frozen in time. The three Nobel Prize winners developed a technique called cryo-electron microscopy (cryo-EM), which allows the machinery of life to be visualised frozen in their natural form.

The process makes it possible for life’s molecular machines to be captured mid-movement and allows scientists to visualise processes that have never before been seen.

Speaking ahead of the event, CAST’s Assistant Headteacher Dr Alistair Easterfield said: “Our students are used to working with some of the area’s top scientists through their college work and our innovative curriculum, it is great to be able to share the excitement in what we do with a wider public audience.”

“The event is a great way for our students to see they are an important part of the Cambridge Science community and not just students in a school.”

Topics for the other four Science at 6 Lectures are: The Future of organ transplantation:  Science, technology, ethics and law; What’s the point of pain?; Oliver gave his heart to Amelia . . . and his lungs to Chloe; and Sierra Leone, Ebola and beyond.

As well as the lectures, CAST will host one of the main events on the final day of the Festival, Sunday 25th March, when over 40 external organisations will come into the school to run interactive activities throughout the day.

Around 3,000 visitors are expected to visit the school during the day, which runs from 11am to 3pm.

Activities include: Cells in the spotlight; From bench to bedside: How are therapeutic drugs developed?; High-tech gizmos and apps for a healthy brain; Movement matter: Bones & joints, repair, regeneration and replacement; Neural networks at the Cambridge Biomedical Campus; Sensational fluorescent fruit flies as well as Your Immune Army: How do cells communicate and sense?

In addition to events at CAST, there are many more going on across Cambridge between 12th and 25th March. Please go to the Festival Website at: www.sciencefestival.cam.ac.uk for details of all events.

We are a cluster of five schools in the South of Cambridge with a local, national and international reputation for educational excellence. We pride ourselves on an innovative approach to teaching and learning and a commitment to high standards for all. www.cap.education ...