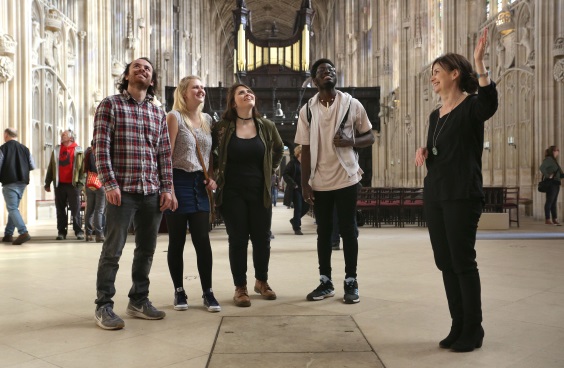 The number of people taking part in an official, guided walking tour of Cambridge increased by nearly 10% in July and August – from 15,700 in 2017 to 17,000 this year – according to figures released by Visit Cambridge & Beyond (VCB).

VCB operates ten themed public tours throughout the city, seven days a week, as well as a number of private tours.  Each tour caters for a maximum of 20 visitors, out of respect for residents and the busy Cambridge streets.

The organisation works only with trained Cambridge Blue Badge Guides, known for their expertise and enthusiasm, and currently has around 130 - the largest number of guides outside London.   It takes nine months for a Cambridge Blue Badge Guide to become fully trained, as they learn facts and anecdotes about the city as well as practical knowledge, such as the safest and most convenient places for groups to stand.

“Our tour guiding has a strong reputation nationally,” said John Milne, Guided Tours Manager for VCB, adding:  “Recently this has been recognised as I have been invited to speak at the National Tour Guiding Conference in London, in November, in recognition of VCB’s knowledge and best practice around innovation in tour guiding.  This is the first conference of its kind and the event will give us an opportunity to showcase our products at national level.”

VCB guided tours are a key element of the organisation’s strategy to manage the way that visitors move around the city centre and preserve the city’s heritage: “Our official tours help to combat the potential problems of over-tourism,” explains Emma Thornton, CEO of VCB.

“For example, many visitors, particularly those from China, arrive in large groups, sometimes up to 50 at a time, and only use one guide. Trinity Street can become almost impassable at peak times and if you have 50 people standing in front of Kings College at any one time, it’s a problem.  We’re aware that this is a concern for those living and working locally and that it affects their enjoyment of the city centre.  We’re developing a plan to try to influence tour groups pre-arrival to change this behaviour, for example by getting them to use our official tours instead, so that we can break up these large groups, to help mitigate any negative impact on the city.”

Only official VCB guides are permitted to conduct tours inside many of the colleges.  “Most colleges want to be seen as accessible but the general increase in visitor footfall is becoming an issue,” explained Emma.  “Access to the colleges needs to be managed, otherwise some may have to close to the public altogether.  Our guides guarantee that groups behave in a considerate manner and abide by individual college  rules.  The guides also explain how the colleges are not just old buildings and  not museums: and that their main role is one of education.”

VCB is actively looking for new ways in which to manage the flow of visitors around the city, developing products such as free Apps for a younger audience, but the organisation is confident that there will always be a market for walking tours.  “Our guides bring the city to life for visitors, as they explain its history and heritage and tell tales of its quirky traditions,” said Emma.

About Visit Cambridge and Beyond

Visit Cambridge and Beyond is the official tourism service for Cambridge and the surrounding areas, responsible for marketing Cambridge to domestic UK and established European and other international markets and for showcasing the best that Cambridge has to offer.