Going beyond genomics to a healthier future 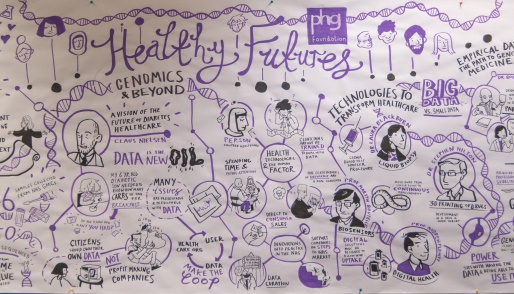 Genomic medicine is here to stay – but more needs to be done to ensure NHS patients can benefit, was the message coming loud and clear at the conference held by Cambridge health policy think tank, the PHG Foundation, this week. Learning from the genomics experience will be crucial as new technologies come on stream to transform and personalise healthcare delivery, delegates were advised.

In her opening speech, Professor Sue Hill (Chief Scientific Officer for NHS England) celebrated the benefits genomics is already bringing to patients, specifically those with rare diseases and cancer, but cautioned that huge inequalities in access to genomic medicine must be tackled. She outlined the government’s ambitious plans to create a National Genomic Medicine Service for the England’s entire population of 55 million people by October 2018.

The necessity for change in order to deliver genomics within the NHS was reiterated later in the day by Chief Medical Officer for England, Professor Dame Sally Davies. Referring to her Annual Report released earlier this year, Generation Genome, she  cautioned that major cultural shifts within the NHS would be needed for this vision of future healthcare to happen.

Sandwiched between these two national stalwarts of science and health were other expert speakers addressing aspects of genomics and outlining a range of other technologies with the potential to transform healthcare, including liquid biopsy, 3D printing, biosensors and digital devices, which are having an impact on personalised healthcare.

Of course, putting the patient or person at the centred of personalised care is also vital; Claus Nielsen from the Danish Data for Good Foundation offered a patient perspective and called for a cultural change in health systems with respect to digital technologies and the data they generate, including patient-generated health data.

A parallel session with Sir Jonathan Asbridge of Healthcare at Home and Chiara Garratini of Intel examined user-led design and delivery, whilst another with Carla Deakin of the NICE Office for Market Access and NHS Innovation fellow Francis White of AliveCor looked at the help (and hinderances) to getting innovative technologies into use in the NHS; AliveCor’s Kardia mobile ECG is not only being used in the NHS, but has also just received FDA clearance for use as a medical device with the Apple watch in the US.

Dr Robert C Green of the US shared experiences from the Genomes2People research programme, which seeks to integrate genomic research with personalised medicine and clinical practice. This included findings from the BabySeq project, offering  clinical whole genome sequencing for newborn babies.

A flavour of the discussions can be found in PHG Foundation’s feed from the day here.

Altogether, it was a busy day for genomics and health; that morning, PHG Foundation’s Dr Hilary Burton was in Westminster giving evidence to the House of Commons Science and Technology Select Committee Inquiry on Genomics and Genome Editing in the NHS; hot on the heels of her evidence session came another in which PHG Foundation trustee Dr Patrick Chinnery and Prof Dame Sally Davies both also gave evidence before heading to Cambridge.

The PHG Foundation is a health policy think tank with a special focus on how genomics and other emerging health technologies can provide more effective, personalised healthcare and deliver improvements in population health.