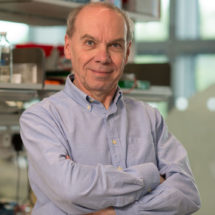 Michel Goedert from the LMB’s Neurobiology Division has been awarded the 2018 Brain Prize. Michel shares the award with fellow neuroscientists Bart De Strooper, Christian Haass and John Hardy “for their groundbreaking research on the genetic and molecular basis of Alzheimer’s disease”.

The research pioneered by the 2018 Brain Prize winners has revolutionised our understanding of the changes in the brain that lead to Alzheimer´s disease and related types of dementias. Around 10 million people in Europe have Alzheimer’s disease. This and other neurodegenerative diseases of the ageing brain cause a great deal of suffering for patients and their families and are a huge challenge for society.

Michel’s work was instrumental in the discovery of the importance of Tau protein for Alzheimer’s disease. When Tau acts abnormally, it assembles into clusters of filaments and becomes insoluble. A pathological pathway leading from soluble to insoluble filamentous Tau is believed to cause neurodegeneration. Different Tau filaments are associated with distinct neurodegenerative diseases, including Pick’s disease and progressive supranuclear palsy, where Tau filaments form in the absence of beta-amyloid deposits outside brain cells.

In his more recent studies, Michel showed that filamentous Tau clusters can propagate along nerve cell pathways through self-seeding. “Eventually – perhaps decades after seed formation – the first disease symptoms appear”, said Michel. “Therefore, if you can halt propagation, that could lead to ways to prevent and treat disease.”

Upon winning the award, Michel said: “At a time when there is disappointment about the lack of an effective treatment for Alzheimer’s disease, it seems clear that we need to have a more detailed understanding of the mechanisms of disease”.

The chairman of the Lundbeck Foundation Brain Prize selection committee, Professor Anders Björklund, said, “These four outstanding European scientists have been rewarded for their fundamental discoveries unravelling molecular and genetic causes of the disease that have provided a basis for the current attempts to diagnose, treat and possibly even prevent neurodegenerative brain diseases. The award recognises that there is more to Alzheimer´s disease than amyloid, and that the field of dementia research is more than Alzheimer´s disease alone.”

The Brain Prize, awarded by the Lundbeck Foundation in Denmark, is worth one million Euros. Awarded annually, it recognises one or more international scientists who have distinguished themselves by an outstanding contribution to neuroscience. Michel and fellow 2018 winners will receive the award during a ceremony in Copenhagen in May 2018.

The MRC Laboratory of Molecular Biology (LMB) is a world-class research laboratory, dedicated to understanding important biological processes at the molecular level – with the goal of using this knowledge to tackle major problems in human health and disease.