Prince Charles has presented staff and students from The Cambridge Academy for Science and Technology with a certificate - to mark the academy becoming the only school in the UK to reach the finals of the EDT Industrial Cadet Awards two years running. 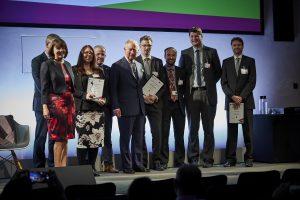 Cambridge Academy for Science and Technology has become the only school in the UK to have gone through to the finals of a national awards scheme for the second year running, in recognition of its success preparing students for the world of work.

Named School of the Year finalist in the EDT (Engineering Development Trust) Industrial Cadet Awards, staff and students from the Academy attended the Awards Ceremony in London on Wednesday March 7 where they were presented with their certificate by Prince Charles.

The Awards are a national industry-led accreditation designed to enhance workplace experiences for young people, with 95% of all Cadets agreeing that they have improved skills as a direct result of their Industrial Cadets experience.

Providing a flexible framework for all sizes of employers to enable them to run accredited workplace experiences, Industrial Cadets ensures that young people can develop the skills they need during these programmes, giving them a valuable workplace experience and a nationally recognised award at the end.

The Cambridge Academy for Science and Technology signed up for the accreditation three years ago because it believes the aims of the award reflect those of the college. As a University Technical College, for pupils aged 14-19 specialising in STEM subjects, the school allows its students to undertake project-based learning at least one day a week to give them practical skills to use alongside academic achievement.

The Awards this week were to mark each school’s work to embed the ethos of workplace learning into their curriculum. One of the projects associated with the Awards included CAST students developing wearable technology to help them monitor pollution levels.

Speaking after the Awards, Assistant Headteacher at CAST, Dr Alistair Easterfield, said: “The need for practical and employability skills alongside academic performance in producing successful STEM graduates is integral to our college ethos. We have found the Industrial Cadets framework helpful in allowing us to reflect on our current practice and address skills gaps.”

“The award has also been extremely helpful in providing external validation of the students’ learning and provided them with a real sense of achievement in completing projects well.”

A representative from Arm, one of CAST’s main sponsors, was also awarded a certificate at the ceremony. Simon Humphrey, Senior Manager of Sustainability at Arm, won the Change Maker of the Year Award in recognition for his work both locally and nationally in support of Industrial Cadets and EDT.

We are a cluster of five schools in the South of Cambridge with a local, national and international reputation for educational excellence. We pride ourselves on an innovative approach to teaching and learning and a commitment to high standards for all. www.cap.education ...