Find out why Becki Harvey and Jane Clarke are each running a marathon for the Arthur Rank Hospice Charity-funded service next month for The Alan Hudson Day Treatment Centre in Wisbech. 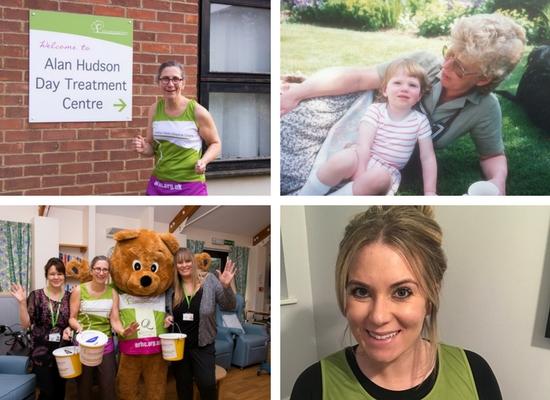 Two women with personal connections to the Alan Hudson Day Treatment Centre, will be going the extra 26.2 miles to raise funds for the Arthur Rank Hospice Charity-funded service! Both Jane Clarke, a registered staff nurse who works there, and Becki Harvey, whose grandmother was cared for by the team, are training for their first marathon in April 2018.

Jane Clarke – a staff nurse, who works alongside a team of ten staff and many more dedicated volunteers at the Alan Hudson Day Treatment Centre based at North Cambs Hospital - provides hands-on care and support to hundreds of people living with a life-limiting illness in Wisbech, the Fens and the surrounding area. She explains: “The unit not only offers day therapy - which helps us to assess and support patient’s physical, psychological, social and spiritual needs - but also provides symptom management, psychological support and treatments such as blood transfusions and iron or other infusions for things like pain relief.”

No charge is made to patients for care. As with all Arthur Rank Hospice Charity services, the Treatment Centre is funded partly by statutory sources, with the remaining proportion raised thanks to the fundraising efforts of the local community.

Jane took up running in 2014 and has since raised £800 through her running challenges. Her run in Manchester on Sunday 8th  April 2018 was her first marathon distance, but she was feeling motivated, adding: “I know it’s going to be really hard, but every day I see first-hand how we make real differences to the lives of those we care for. When I was doing my 20-mile training run at the weekend, I was thinking about one lady who has done 299 marathons! She - and some of our other patients who used to run when they were younger – are my motivation when things get tough. I have the choice to run still, so I will: it may hurt for a little while but what they’re going through is a lot harder. Thinking of them is what keeps me going.”

Becki Harvey, whose family live in and around Wisbech, will be running the Virgin Money Giving London Marathon on Sunday 22nd April 2018 in memory of her Grandmother, Margaret Halstead. She wants to say thank you for “the care and warmth” that staff showed throughout the treatment she received for Myelodysplasia Syndrome. The condition meant that Margaret visited the Treatment Centre for blood transfusions every three weeks, for eight years. The nursing and charity staff soon became familiar faces to Becki’s Grandfather and other family members. After Margaret passed away last August 2017, Becki secured a charity bond place in the sought-after marathon event and has pledged to raise £1500 for the cause!

She adds: “The team went over and above for our family in terms of support and advice on so many occasions. We are so grateful for everything that was done for Grandma. The Centre was more than just a treatment centre to her, it provided community when living with quite a rare illness. It’s important to me that other families like us are always supported by the great work Arthur Rank Hospice Charity does.”

Having reached over £1000, Becki is still working hard to fundraise (alongside her marathon training!), and is delighted that her employer, Santander  will match fund her efforts.

There is no charge for the Alan Hudson Day Treatment Centre’s care, but the Charity needs to secure in the region of £350,000 every year, in order to provide services to patients and their loved ones. A proportion comes from statutory sources, with the remaining funds raised thanks to the whole-hearted efforts of the local community, who take pride in this shared responsibility. Amongst other things, they volunteer for the Treatment Centre, hold their own fundraising event, leave a gift in their Will, or take on a personal challenge like a marathon.

To find out more about running a marathon for the Alan Hudson Day Treatment Centre, call Amy Bidwell in the fundraising office on 01223 5883, or - to talk to a member of the team about other ways to support the Treatment Centre - contact Phillippa Ashcroft on 07766 733062 or phillippa.ashcroft@arhc.org.uk.

In addition to fundraising to support its daily funding costs, the Treatment Centre has recently launched a fundraising appeal, aiming to raise the final £50,000 needed for vital expansion and redevelopment works at the facility. To find out more about the appeal, search for ‘Alan Hudson DTC Appeal’ on JustGiving.