£64,700 raised by trekkers taking on the Sahara for Arthur Rank Hospice 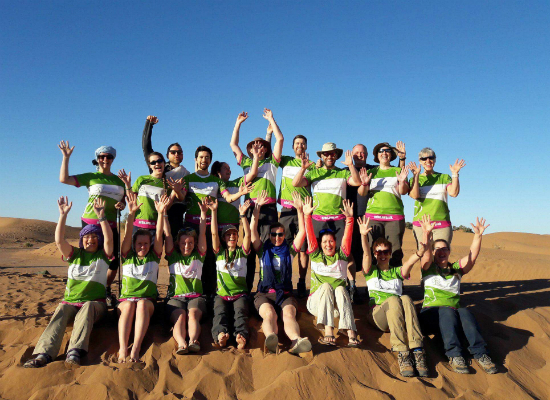 Eighteen adventurous hospice supporters – who trekked 70 kilometres across the world’s hottest desert in March, in temperatures reaching 40 degrees C – have now raised an incredible £64,700! Each supporter who took part in the once-in-a-life-time adventure has their own connection to the Arthur Rank Hospice and - in a #TeamArthur first - a family of three brothers and one sister were among the trekkers.

Their Mum, Sandra Spencer, was diagnosed with pancreatic cancer in September 2014.

As they explain on their family JustGiving page, Sandra “coped marvellously taking chemotherapy then radio therapy all in her stride” and “for two years there were ups and downs […] but eventually Mum got tired, she was exhausted by it all. The last infection she got was a rare and serious one. It set up camp in her liver and caused her so much pain and sickness that she decided in November 2016 that she’s like to be looked after at Arthur Rank Hospice.”

The family had a last Christmas with their Mum before she passed away on 19 January 2017: “They sorted out her pain quickly and kept her comfortable without making her too groggy. We got to make so many more precious memories and because of that we’d like to give something back…”

Whilst their Mum was being cared for on the Inpatient Unit at the Hospice, the four heard about the Sahara Trek which was taking place in March 2018 and were inspired to take part. Their aim was to raise a combined total of £10,000 “to help many other families”. Their family fundraising total has now reached an impressive £10,133 (as of 1 May 2018) at https://www.justgiving.com/fundraising/2018-team-spencer.

The brothers and sister took part in the challenge alongside fourteen other members of #TeamArthur, each with their own connection to the Hospice, as Jade explains in one of the family’s video blogs from the Moroccan desert: “Feeling really good – I think all of us are so positive, there’s such a good atmosphere. Everyone’s got their own stories, which have been really interesting to hear. We’re just about to head off shortly: the camels are getting packed up, ready for the next day ahead.”

In another video blog, two days into the trek, Jade shares that - despite most of the group nursing excruciating blisters - spirits remain high: “We’ve been walking over all sorts of different terrains and stuff, so there was quite a lot of stones which was quite hard going. Everyone’s suffering a bit today. But we got to camp last night which was a really, really, good feeling. We had an amazing dinner, and then watched the sunset which was incredible, because - in this day and age - life’s too busy and you just don’t get chance to take time out and do that kind of thing. So that was a special moment.”

The group - who became like a “little family” during the trek - completed three3 full days of trekking, walking between 15 and 20 kilometres a day, then camping for one final night under “just spectacular” stars at Oulaid Driss, before returning to Marrakesh by bus. The fourteen other members of #TeamArthur taking on the desert included Harriet Adams, Antony Bagott. Lily Barrett (a volunteer within the Hospice’s Day Therapy service), Karen Curdy (a complementary therapist at the Hospice), Serena Dama, Helen Forbes, Ros Mills, Jennifer Mullucks, Alison Pinney (Fundraising Administrator at the Hospice), Helen Rankin, Deanna and Ellie Raven, Phil Smith and Lynne West.

Each trekker has their own personal connection to the Hospice. Sadly, Ken Smith (Bar Hill) who had initially signed up, was unable to take part due to injury after falling on Mount Snowdon whilst training for the challenge, yet generously chose to donate the cost of his trip to the Charity.

Second eldest brother Lloyd Spencer summed up his feelings towards the end of the challenge: “I’m getting to know my brothers and sister again: obviously we’re close anyway but you chat along the way, contemplate and think about why you’re here. I really enjoyed being able to spend time with them again and it’s made me think about some things about myself: just, to spend more time with my family and realise we are a fantastic family and support system […] It’s just a fantastic opportunity this and supporting a brilliant, brilliant cause. I hope other people get to do it in the future.”

You can hear and see #TeamSpencer’s full video blog story on the Arthur Rank Hospice’s YouTube channel at https://youtu.be/2f_2pljgKrs

Plans are already in the pipeline for the Hospice’s next Sahara Trek – which is set to take place between 21-28 March 2020 – and will also include volunteering with a community project in Marrakech. If you would like to register your interest as an individual or a group, please contact the Hospice’s Community Fundraiser Amy Bidwell, who looks after the Hospice’s Sahara Trek and other challenge events, on amy.bidwell@arhc.org.uk or 01223 675883.

To find out more about Arthur Rank Hospice Charity’s challenge events including treks, runs, cycles and skydives visit http://www.arhc.org.uk/challenges.asp or call the Hospice’s Fundraising Team on 01223 675888.