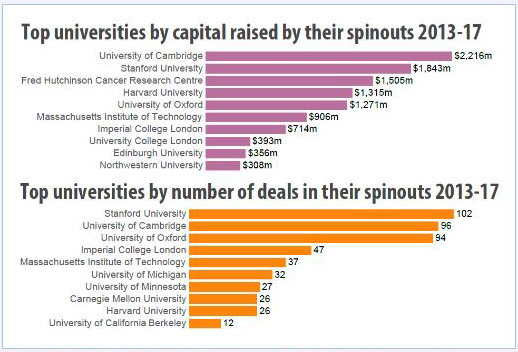 An annual data review published by Global University Venturing reports that University of Cambridge spin-outs raised $2,216m in capital for 2013-17, putting it at the top of the global list of universities. The article also reports that in this period Cambridge’s spin-outs closed 96 deals, making it second only to Stanford University in total number of deals, though ahead of it in total capital raised.

“We are pleased to see these results and believe they should lay to rest any lingering doubts about the vitality and global standing of the university innovation sector in the UK,” said Dr Tony Raven, Chief Executive of Cambridge Enterprise, the commercialisation arm of the University of Cambridge.

In its breakdown of each university’s deals, the GUV report revealed that in spin–outs from US universities, venture and corporate capital typically dominated the deal numbers. In the UK, by contrast, university and university-associated funds have dominated. “This is an important distinction and shows how, in the absence of a vibrant, early stage venture capital market, universities in the UK have taken control of helping their innovations and spin-out companies cross the notorious ‘Valley of Death’ with remarkable success”, said Raven.