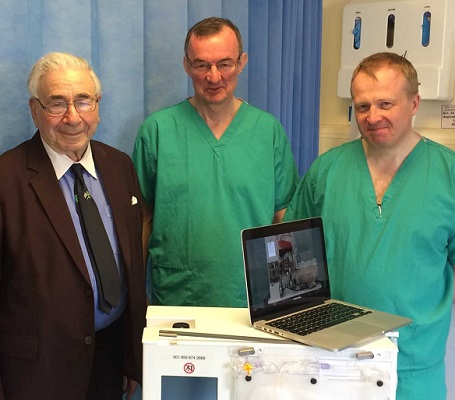 Two Cambridge University Hospitals’ consultants and a nurse have been named in a prestigious report that singles out those who made a difference in the run up to the 70th anniversary of the NHS.

The commission is the independent regulator of health and adult social care in England and makes sure services provide safe, effective, compassionate, high-quality and improving care.

Professor Watson and Mr Butler hit the headlines in May after they announced that CUH is the first in the country to routinely perfuse livers using an advanced new machine.

It coincided with the 50th anniversary of Europe’s first liver transplant at Addenbrooke’s by pioneer Professor Roy Calne and the launch of a £250,000 appeal by Addenbrooke’s Charitable Trust to fund consumables used in perfusion.

The perfusion machine will help newly donated livers survive for longer and, crucially, enable doctors to test how well they function, boosting the chances of successful transplantation. It also means that livers that might otherwise be dismissed as unsuitable, including those from older donors, could be deemed healthy enough to save a life.

The report says: “This has allowed the transplant of many livers that previously would not have been used for fear they would not provide a satisfactory function.”

Deputy Charge Nurse Brookes was singled out for working with procurements, pharmacy and nursing colleagues to develop a stock storage and control system which saves time and money.

He noticed there were big variations in stock levels, with some over stocked and some under-stocked. Some of the over stocked items were high cost.

The report said: “The result was a very significant cost saving for the Trust and the time saved being converted into more time to care for patients. His model has been shared and adopted across his division and he continues to be a role model for stock management.”

Prof Watson said: “Andy and I are honoured to be named in this report and accept this praise on behalf of all of those involved in the transplantation programme here at CUH, since it is a team effort.”

Mr Butler added: “We are very grateful for the recognition of everyone’s work, but of course none of this would be possible without the courage of the donors and their families.”

Deputy Charge Nurse Brookes said: “I feel very flattered and would like to thank everyone from the procurement team who engaged with this and also my colleagues on the ward, they too have been keeping an eye on our stock levels and feeding back to me. Without them it would not have been a success and there is still plenty more to be saved going forwards.”

Anyone who wants to make a donation towards the ACT appeal should visit to www.act4addenbrookes.org.uk/transplant