Bovine TB is one of a group of diseases caused by mycobacteria that has devastated the agricultural industry worldwide. Now UK agri-tech start-up PBD Biotech, developers of the first rapid test for live mycobacteria, has secured £400,000 in its first major strategic investment round to fund international trials and launch a suite of products. 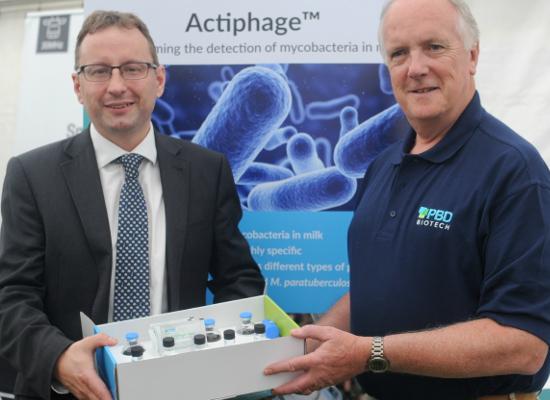 International demand for first sensitive test for mycobacteria in blood or milk.

In the past year, in the UK alone, bovine TB has led to the slaughter of over 30,000 cattle and cost the UK taxpayer more than £100 million as, until now, there has been no accurate way to test for the disease. Actiphage™ addresses this challenge.

Early private investor Tom Green, former CEO of EU agri-business Spearhead International Ltd, explains the Actiphage test’s potential: “Mycobacterial disease is a global challenge for the whole livestock industry, so the scale of the problem PBD Biotech is addressing is enormous, and the targets for the new technology are very clear.

“This new technology has the potential to transform the way we operate in agriculture and, additionally, has huge application in the food industry.”

Set up just over 12 months ago, PBD Biotech has developed Actiphage, a rapid, highly sensitive test for bovine TB, Johne’s and other mycobacterial diseases in livestock, wildlife and exotics.

Actiphage can accurately identify the presence of live bacteria in blood, milk or other tissue in as little as six hours and can also distinguish between infected and vaccinated animals. It has the UK Government’s approval for chronic herd breakdowns, and the company is currently conducting a number of field-based trials.

Tom, who was appointed Chair of PBD Biotech’s board in September 2017, commented further: “The first challenge in disease management is diagnosis and there is a huge need for improved accuracy in the current testing regime. The ability to confidently eliminate false negatives – diseased animals which go undetected – is fundamental to both the maintenance of disease-free herd status, as well as to the proactive control, management and reduction of disease in infected herds.

“This round of investment is enabling PBD Biotech to accelerate its go-to-market strategy, putting more resources into manufacturing and lab development, as well as extending training capacity and conducting further trials work.”

Controlled trials have demonstrated the effectiveness of Actiphage. Its use by a Devon vet as part of a private TB eradication strategy helped clear a dairy herd of bovine TB for the first time in six years. In May 2018, the UK Government accepted the phage-based technology for exceptional private use on TB-stricken cattle herds in England.

International trials are underway in Canada and France, with discussions in multiple regions including the USA, Dubai and South America. As a result of this funding round, PBD Biotech has established a Canadian subsidiary for distribution and, in the longer term, manufacturing.

New Anglia Local Enterprise Partnership (LEP) manages the co-investment fund; their CEO Chris Starkie said: “Seed funding of this kind is vital for businesses to take innovative new ideas and turn them into something tangible – with job creation and economic growth the result. PBD Biotech is doing just that, and doing it within an industry sector that plays a key role in driving our economy forward.”

For more information about PBD Biotech and Actiphage, visit www.pbdbio.com