Arthur Rank Hospice’s Star Shine Night Walk sponsored by Bramley Court Care Home, has now raised almost £35,000 (as of Friday 29 June)! More than 450 walkers - many of whom were walking in memory of someone they love - embraced the neon-theme and turned out in spectacular outfits to celebrate the event’s 10th Birthday year, with hundreds not finishing until the early hours of Sunday 20 May 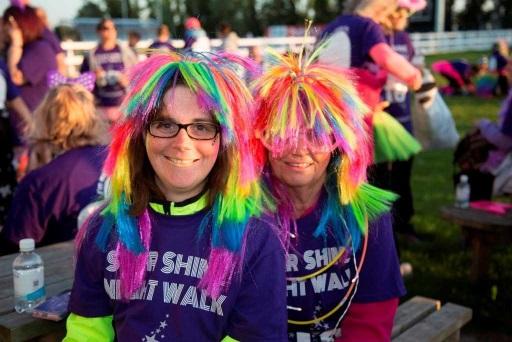 There was an electric atmosphere all evening, with a star appearance from Cliff Parisi, previously Minty Peterson in EastEnders and now handyman and gardener Fred Buckle on the BBC’s ‘Call the Midwife’. The popular actor happily chatted to participants, posed for photos and cut the Star Shine Night Walk’s 10th birthday cake kindly donated by Regency Cakes. Cliff then led participants to the start line in a conga, sounded the klaxon and cheered walkers over the start line at Shelford Rugby Club.

The walk followed a picturesque 10 or 6.5 mile route around the Cambridge countryside and historical sights of Cambridge. Participants wearing glowing bunny ears, glow in the dark tutus, fairy light accessories and sporting glitter or neon decorated faces, made their way past colourful mile-marker lamp-posts, each sponsored by a local business.

Emma Thong, from Cambridge participating in ‘Team Louise’ in memory of Louise Thong-Allaham, and explains why she and her family were so passionate about taking part in this year’s Star Shine Night Walk:

“My sister in law, Louise, was cared for by Arthur Rank Hospice in her final days. Before that, we’d never heard about it or been there, but what happened made us realise what an amazing place it is. She was there for 4 nights and it was the best place she could have been. It’s such a loving, caring environment. Everyone has time to listen, help and support you and your family. They did everything they could to help and they understood, from the care staff to the team of cleaners. Nothing was made a problem and they treated Louise with such dignity and respect. Since then we’ve been doing everything we can to support it.

“It was all the little touches, it just seemed really caring: Firaz – Louise’s husband, had a back massage while he was there with Louise, and she had a pedicure. We even had the use of one of the family apartments upstairs. Having that for the family who had to travel from far and wide – and for her husband and son especially - was great. We got to spend special times with Louise and on Sunday evening something told us in our hearts to stay the night. This allowed family to be with her and spend her final moments with her.

“We lost Louise on the 19th of March, it was her funeral on the 19th April and then Star Shine Night Walk was the 19th of May – so it was emotional. Especially the minute silence before the walk started. It just makes you think and brings memories back: good memories and some sad memories too of course. The walk was great because everyone doing it had also lost someone special to them. Everyone dressed up and it was like we were one big support group all going out together, to let the town know who we were and why we were doing it.

“Going through the finish line at the end was tearful as well. It was kind of like an end. But it was good: the feeling and the ambiance and everything. At one point some people behind us were singing really cheery songs. There was 9 of us in our team: myself; my husband and our two sons; Louise’s husband, Firaz and their son Matthew; her other brother Roger, his wife Claire and their daughter Emily. We were saying after about how nice it was that people were happy and I think that everyone felt the same way. We’d all been kind of there and knew what it’s like and we were just all supporting each other.

“When we came away from Arthur Rank Hospice after we lost Louise, we went online and had a look to see how much things cost to stay there and how much it would have cost for Louise and Firaz to have their back massages and manicures and things. But you think, nothing can repay the amount of support that you’re given whilst you’re there. It’s just amazing because it’s all free – even being able to stay there and everything. Even my son Cameron has been making para-chord keyrings and has raised £300 on top of the £995 we raised from the walk. We want to help other families now and give back, so someone else can feel the support. It makes such a big difference to somebody’s life.”

Bramley Court Care Home, headline sponsor of Star Shine Night Walk 2018, had their own team taking part with twelve staff and several family members walking - with two residents even coming along to see them off at the start line. Maureen Hudson, Residential Manager, explains why they enjoyed taking part:

“The atmosphere was amazing, full of colour, fun, excitement and determination to complete the walk, for an amazing cause that is close to many of our hearts. The Arthur Rank Hospice do fantastic work and deserve all the support that we can give.”

The colourful photos from the evening, can be viewed by liking Arthur Rank Hospice Charity’s Facebook Page and clicking onto the photo albums of the evening and the memory arch shared on the Charity’s page.

Sponsorship is still being collected from the walk, with participants being encouraged to send in any remaining donations by the end of July. Funds can be sent by cheque to, Arthur Rank Hospice Charity, Cherry Hinton Road, Shelford Bottom, Cambridge, CB22 3FB (please include a covering note marked ‘Star Shine Night Walk’). Alternatively, they can be sent online at www.arhc.org.uk/one-off-donation, transferred over the phone by card (call 01223 675888), or handed over in person by visiting the Hospice reception, between 9am-5pm on Monday to Friday.