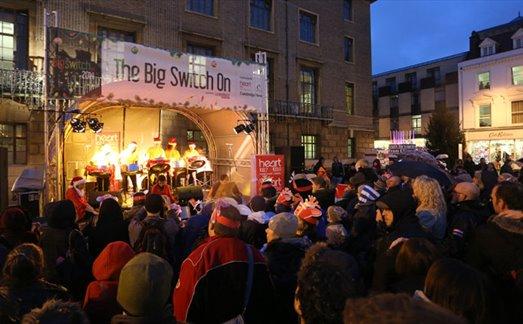 The 100-metre sprinter, who grew up in Shepreth and now lives in Doddington, won gold medals at both the 2012 London Paralympic Games and the 2016 Rio Paralympics – and, last year, proved equally nimble on the dance floor when he became the first amputee Paralympian to compete on BBC One’s Strictly Come Dancing, staying the course for eight weeks!

Jonnie, 25, will quite literally be tripping the light fantastic at the event organised and funded by Cambridge Business Improvement District (BID), setting off a blaze of twinkling new lights and schemes across the city.

Instead of a traditional Christmas tree, the centrepiece for the display will be a dazzling walk-through illuminated tree, situated in Market Square.

The new illuminations will additionally include enhanced schemes on Green Street, Bridge Street and Magdalene Bridge – while The Guildhall and many of the trees around the city will also be picked out with glittering strands and golden uplighters for the very first time.

Jonnie told us:“I feel hugely honoured to be turning on the lights in this beautiful town - and I’m very excited to see the brand new Christmas lights being unveiled on the night. I look forward to sharing it with so many festive-spirited people.”

The Big Switch On event - which takes place on Sunday 18 November - promises to be a fun-packed day for all the family, with a lively line-up of Christmas entertainment from local schools, performing arts groups, choirs and singers including busker Tom Korni, Rock Choir, Razzamatazz, Tom Splitz, Sing! and the Fulbourn primary school choir.

Performances start at noon and carry on until the main Christmas lights switch-on with Jonnie, accompanied by the Mayor of Cambridge, Councillor Nigel Gawthrope at 17:00.

The whole event is being compered as usual by Heart 103 presenters and broadcast live on the radio station – and, for the third year running, is being sponsored by the Cambridge Independent newspaper.

Becky Burrell, Marketing & Commercial Manager for Cambridge BID, said: “We are thrilled to be joined by Jonnie Peacock, and excited to be unveiling such stunning new Christmas lights at our sixth Big Switch-On event. It’s going to be a magical experience for all, young and old, and we look forward to welcoming many familiar faces as well as lots of new ones.”

The Lion Yard shopping centre will also be showcasing new Christmas lights this year as well as a brand new grotto in the atrium for children to visit.

The Grand Arcade also has an afternoon of entertainment planned, which starts at noon and includes performances by Stagecoach Performing Arts School, Cambridge School of Visual and Performing Arts, Vocal Remix, Cambridge Theatre Company – culminating in the shopping centre lights being switched on at 4pm by BBC Radio Cambridgeshire presenter, Jeremy Sallis.

Cambridge Business Improvement District (BID) consists of 1,200 city centre businesses, working together to promote the city to visitors, residents and workers, while ensuring they experience a welcoming and vibrant street scene that is both clean and safe. ...