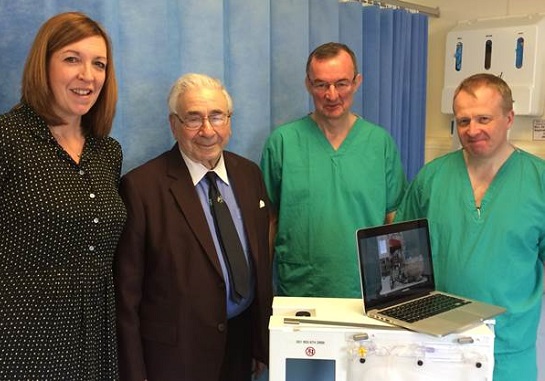 Cambridge surgeons saved nine lives in six months using livers that, until now, would have been considered unsuitable for transplant. The figures coincide with national Organ Donation Week, which runs from today (Monday 3 September) to Sunday (9 September) to encourage people to think about becoming a donor.

The operations were carried out at Cambridge University Hospitals NHS Foundation Trust, which is the first in the country to routinely perfuse livers using a specialist new machine.

The programme, developed by Professor Chris Watson and consultant Mr Andy Butler, allows surgeons to keep alive donated livers that might be rejected after visual inspection, for up to 24 hours and thoroughly tested.

The patients to benefit, mainly men aged between 29 and 69 from as far afield as Southampton and Nottingham, are all said to be doing well after their surgery, which in each case took between six and eight hours.

They were treated by a team of surgeons backed by registrars and anaesthetists, specialist nurses who work with donors’ families and transplant coordinators who set everything up.

Professor Chris Watson said he was delighted with progress being made with the machine, which was unveiled on May 2, to mark the 50th anniversary of Europe’s first liver transplant by the famous Addenbrooke’s professor, Sir Roy Calne.

Prof Watson, whose machine pumps a blood-based solution of oxygen and nutrients to keep livers healthy, said: “Put simply, it has helped us save an additional nine livers and nine lives in February. Three livers were still regarded as unsuitable after testing and rejected.

“Organ Donation Week seems an appropriate time to share our success, since it highlights that we are doing all in our power to make the best possible use of every liver that is generously donated.”

According to NHS Blood and Transplant three people every day die in need of an organ transplant. Becoming an organ donor only takes a few minutes by registering online.

Anyone who wants to make a donation to the appeal should visit www.act4addenbrookes.org.uk/transplant