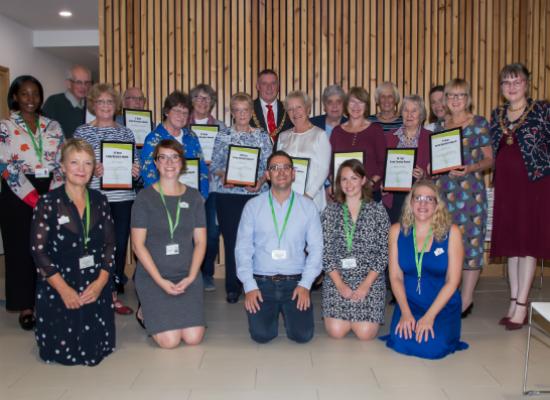 Arthur Rank Hospice was delighted to welcome over 50 guests to the Hospice on Thursday 11 October. The annual occasion provided a chance to reflect on the last 12 months and acknowledge and recognise those involved in the successes. It also focused on thanking the 200 staff and the 500 plus strong team of dedicated volunteers who make very real differences to patients, their loved ones and supporters every day of the year.

Canapes and refreshments were served upon arrival in the Bistro and whilst the atmosphere buzzed with excitement, the Hospice’s choir 'Skylarks' - comprising volunteers and staff - performed. Trustee, Lee Maughan welcomed the evening’s guests, thanking them for their continued support of the work of the Hospice and also the contribution that those present had made to Hospice Care Week before CEO of Arthur Rank Hospice, Dr Lynn Morgan spoke fondly of the progress of the Hospice during the past year and the sad farewells to valued staff and volunteers who were each imprinted in the Hospices history and memories.

The evening also formed a fitting opportunity to welcome Sara Robins, who was recently appointed Director of Clinical Services. Sara talked about how she was excited to join the Arthur Rank Hospice Team and the warmth and kindness that she had already witnessed in her first month of service. Sara introduced a video demonstrating the importance of bereavement support. The Hospice’s ethos of ‘making every moment count’ became quickly apparent, as the journey of a family member was traced from initially visiting the Hospice, to taking the momentous step to attend bereavement appointments and subsequently a support group following the loss of his partner. It formed a touching reminder of the care that the Hospice offer, not only to patients, but to the whole family.

The Mayor, Cllr Nigel Gawthorpe said he felt privileged to be able to present the awards to the extremely worthy team of volunteers and spoke positively of the impact the work of the Hospice has for those in the community. The Mayor continued by saying: “‘The volunteers are an inspiration and deserve a massive amount of respect”: a sentiment shared by all of the staff and patients at the Hospice.

The Mayor then presented 13 volunteers with long service awards for five, 10, 15 and 20 years’ service. Volunteers are integral to the day to day operation of the Hospice, providing clinical, administration and/or fundraising support, depending on which of the many roles they take on.

A further 13 volunteers were unable to attend on the evening but are also celebrating their achievements having served 5 years and above, with Margaret English and Barbara Marshall also celebrating an astounding 20 years voluntary service at the Hospice.

As the evening drew to a close, ‘I heart my hospice’ cupcakes, and tea and coffee were served, as the 'Skylarks' sang further songs to bring the evening to a close. Guests were able to buy Christmas cards and puddings, discover more about 'Your Hospice Lottery' and the Hospice’s new Contactless donation devices, and admire the beautiful memory tree which now takes pride of place in the Bistro.