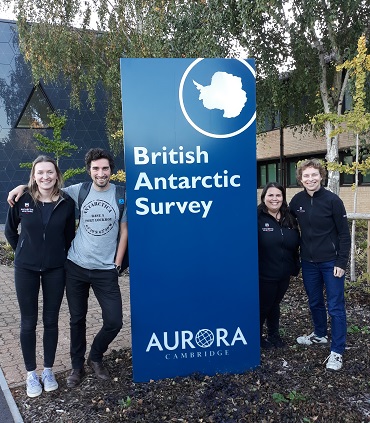 The United Kingdom Antarctic Heritage Trust (UKAHT) is delighted to reveal details of the quintet who will live and work at Port Lockroy on a remote island off the Antarctic Peninsula during the 2018/19 Austral Antarctic summer (November – March).

This year’s intrepid Antarctic explorers, which include three Britons, a Finn and a Frenchman, will be responsible for running the Port Lockroy post-office, managing the island’s museum and monitoring the resident gentoo penguin colony.

Situated on an island no larger than a football pitch, Port Lockroy has been home to explorers, whalers, scientists and sailors who have made vital contributions to Antarctic history. It offers some of the most dramatic mountain and glacier scenery on the west side of the Antarctic Peninsula and is a much-loved visitor landing site.

It is anticipated that up to 18,000 people will visit Port Lockroy on-board expedition vessels throughout the season. Part of the team’s role will also be to welcome these visitors and give them an insight into life on a scientific base in Antarctica in the 1950s.

The museum in Bransfield House, which even has its own gift shop, allows visitors to learn about the early days of British science and exploration in Antarctica. Another big attraction is sending postcards home from the most southerly public post office in the world. Last year’s Port Lockroy team hand-cancelled more than 70,000stamps on postcards destined for over 100 countries.

An additional important aspect to life at Port Lockroy is gathering data for a long-term scientific study of the resident colony of gentoo penguins. Working with penguin scientists at the British Antarctic survey, the team receive specialist training to survey the nesting penguins and their chicks to better understand the impact of environment change at this unique visitor site.

This year the core Port Lockroy team will be joined for five weeks at the start of the season by the UKAHT conservation team.  Undertaking work at both Port Lockroy and Damoy Refuge in nearby Dorian Bay, the four-person conservation team has over 50 seasons of Antarctic experience between them.  They will be spending their time on site conducting a number of surveys of the historic buildings and structures to appraise condition and gather data for inclusion in Conservation Management Plans for each site, as well as conducting emergency repairs if required. In addition, the team will also carry out a number of maintenance tasks, which are usually undertaken by the Port Lockroy team, as well as some more major tasks, including replacing the solar power system which supplies the Nissen hut, the team's living accommodation.

Camilla Nichol, Chief Executive, UKAHT commented: “We are delighted to welcome Hannah back for her second season at Port Lockroy. Her previous experience stands both her and the rest of the team in good stead, particularly during the initial set-up phase on arrival.

“As is the case with every team that travels out to Port Lockroy, our 2018/19 team has undergone extensive training at our Cambridge headquarters, to prepare them for a variety of situations that could arise when living in one of the most remote places on Earth. I’m confident in their abilities to deliver an unforgettable experience for the visitors they will meet during the season and have no doubt that they will also find the experience memorable, unique and of course enjoyable too.”

The group will arrive at Port Lockroy in November and will send regular blog reports back to the Cambridge based UKAHT team, documenting their experiences and giving an insight into what life is like in this most remote corner of the world. Blogs will be made available via the UKAHT website www.ukaht.org