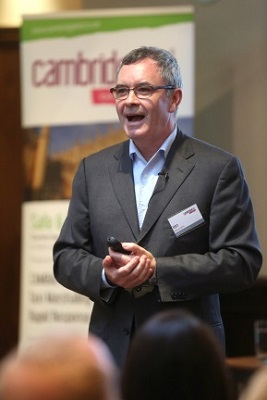 City businesses are being urged to respond to Cambridge City Council’s proposals to increase parking rates, ahead of the consultation deadline on December 21st.

The City Council is proposing to push back the start time for cheaper evening parking rates to 7pm from April 2019. The cheaper parking rate used to start at 5pm – until last April, when it was pushed back to 6pm.

The City Council is also looking to increase parking charges by 50p per hour of stay, for arrivals during the peak times of 11am-1pm on Saturday and Sunday.

Ian Sandison, CEO of Cambridge Business Improvement District (BID) (pictured), is warning that the proposed changes will have a negative impact on Cambridge’s night time economy and early-evening/late-night workers, who rely heavily on their cars when travelling to and from the centre after the Park & Ride and city bus schedules have ended.

He is hoping that if enough businesses are aware of the proposed changes and register their objection in time, the City Council will reconsider its plans.

Mr Sandison said: “Cambridge BID’s vision has always been to create a welcoming, world-class destination for all who visit, live and work in Cambridge – but these parking proposals are not aligned to this focus.

“If the proposals go ahead, cheaper evening parking rates will no longer kick in until 7pm. This would be the second time in a year that the City Council has pushed back the start of the lower parking tariff – to the detriment of both the night time economy and the pre-theatre ‘drinks and dinner’ trade.

“Early evening is a key arrival time for the night time economy and pre-theatre trade.

“In addition, many retailers that trade late rely on shift staff to cover these times, as do bars and restaurants.  However, there is no late-night public transport to the villages, where many of these lower-paid workers live, so they are forced to use their cars to travel to and from work and so will be forced to pay these higher parking charges. This, in turn, is likely to make the hiring of such workers more difficult as unemployment in the region is low, and it would make sense for them to look for work in locations that are easier and more affordable to reach.

“Additionally, the last buses on most Park & Ride routes leave the city around 8.30pm on weekdays and Saturdays, and 6.30pm on Sundays. People living outside the city, who want to enjoy a night in the centre, have no option but to drive all the way in due to there being no late-night bus provision back to the Park & Ride sites.

“Despite these proposed increases in parking tariffs, the City Council has made no plans to offer any additional bus provision as a viable alternative.”