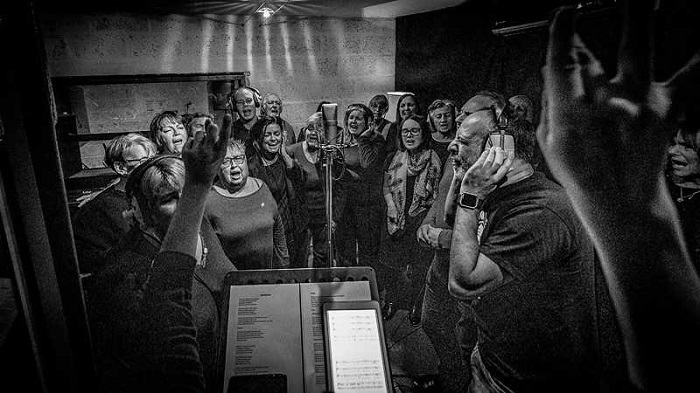 A mother and daughter from The Cambridge Building Society feature on a Band Aid-style single released last week to raise money for a homeless charity.

Natasha and Abbie McMahon answered a plea for mortgage industry professionals to join the Mortgage Industry Collective in recording a single in aid of End Youth Homelessness.

The single is currently sitting in the top ten of the Amazon download chart.

The Mortgage Industry Collective is the brainchild of Landbay Managing Director of Intermediaries Paul Brett and Coreco Brand Director Andrew Montlake who came up with the idea to write and record the single Take Me Home.

Mortgage Servicing Manager Natasha and Customer Service Adviser Abbie travelled to the famous Powerstudio in London, which has hosted icons such as Kylie and Robbie Williams, earlier this month to record the song.

Natasha said: “It was a fantastic experience recording with the legendary Benny D. He is used to working with much bigger and more talented stars so the direction and influence he had on the day will no doubt enhance the final version. There’s such a huge amount of talent across the industry and it was great to have the opportunity to be a part of it.”

Abbie is no stranger to a recording studio having extensive qualifications in music and earlier this year released a three-track EP of songs she wrote and composed herself.

She said: “I feel really privileged that I had the chance to do something I love for an amazing charity. I think it is such a good idea to bring the mortgage industry together in another way to all do something creative for charity.

“I’m not sure if we’ll be Christmas number 1 but as long as we raise enough money and awareness to give the homeless a better Christmas then we will have been successful.”

It costs End Youth Homelessness £25 per day to put a roof over a young person’s head and give them the healthcare, education and employment they need to turn their lives around. Every penny raised from the single will make a real difference to the lives of young people currently on our streets.

Andrew said: “We can’t say thank you enough for all the good feeling and support, from our brilliant bandmates, everyone who took time out to appear on the song, the Sweet Charity Choir and to the amazing Benny D who lived up to his legendary status and then some. He taught us all so much, believed in us and what we were doing and helped all the singers deliver their very best performance.”

Take Me Home is available to download from Google Play, Amazon and iTunes as well as Spotify.