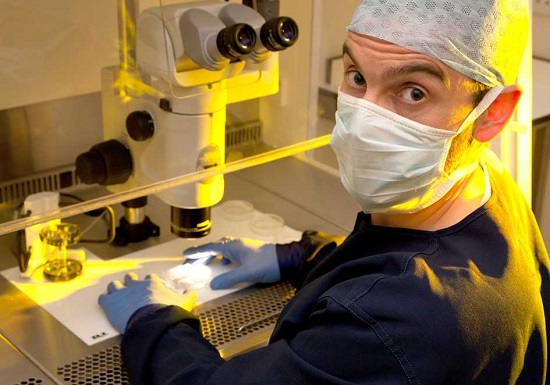 Cambridge IVF has become the first clinic in the world to combine two cutting edge tests to further improve the chances of couples having a baby.

The NHS clinic, which is part of Cambridge University Hospitals, has introduced a super enhanced semen analysis technique, and is drawing on an advanced magnet-based technology at a time when figures show male fertility is dropping rapidly.

The clinic says latest advances increase the odds of pregnancy further - and reduce the possibility of women having expensive, invasive and possibly repeated IVF treatment they do not need.

Cambridge clinicians will not be charging extra – sticking to their mission to provide the best treatment at the lowest cost for those who dream of starting a family but can no longer access NHS-funded treatment.

The enhanced semen analysis will identify samples where there are high levels of oxidising chemicals like hydrogen peroxide, which can damage the vitality and swimming ability of sperm.

The usual culprits include heat, alcohol, smoking, pollutants, obesity, excessive exercise, infection and age and may be overcome with recommended lifestyle changes and support.

Andrologists, using a highly sensitive apparatus, will conduct their investigations at the same time as their standard semen tests, which focus on the number of sperm in a sample, their shape and movement.

In the event IVF is needed the clinic, which aims to turn results around in three days, will recommend a technique known as magnetic cell sorting. This involves mixing a semen sample with magnetic micro-beads which attach only to the damaged sperm which can then be removed using a magnetic filter.

The single best sperm is then selected from the remaining healthy sperm to fertilise an egg using a method called Intracytoplasmic sperm injection (ICSI).

The advances are the latest in a series at the clinic, which in August became the first NHS centre in the country to routinely freeze embryos – significantly increasing the chances of patients becoming pregnant. It also introduced a packages including PURE IVF which offers one cycle of IVF for £2500 including drugs and fees.

Head of the clinic, consultant embryologist Stephen Harbottle (pictured) said: “The decrease in male fertility since 1973 has been staggering but semen testing has remained largely the same for 20 years. The combination of these two techniques has the potential to transform how we identify male factor sub-fertility. It puts us at the cutting edge of science.”

Andrology lead Ruth Chappell added: “We are have one of the largest semen testing services in the UK – testing around 5000 samples a year and it is fantastic that we are the first in the world to combine these two highly innovative tests.”

Lead clinician and Associate Professor, University of Stirling, Alka Prakash said: “IVF is expensive and requires women to take fertility drugs that can have side effects. It is also invasive as eggs are collected from ovaries using fine needles. Therefore if it can be avoided this is extremely positive.”

For more information on Cambridge IVF telephone 01223 349010 or visit the website.

An analysis in 2017 of 185 studies of male fertility concluded that there has been a 52.5% decline in sperm concentration and a 59.3% decline in total sperm count in North America and Europe. In around 50% of cases where a couple are having difficulty conceiving there is a male fertility issue.  There has been considerable focus on female causes of infertility, but far less on male which has led to accusations of over use of IVF technology in situations where thorough diagnostic investigations have not been completed.

Cambridge IVF's was officially opened in May 2012 but its heritage goes back to the early 1990s when the Rosie maternity hospital's assisted conception satellite service was first licensed.  Part of Cambridge University Hospitals (CUH) but located away from the main hospital campus, it provides a discrete, supportive environment with state-of-the-art facilities t.