Living and Working in Cambridge

Cambridge, located in the East of England, 50 miles north of London, is a unique and beautiful city, renowned for its world-class university and the thriving cluster of high technology businesses that have grown up around it.

If you choose to live and work here, you are sure to enjoy an enhanced quality of life, with the opportunity to participate in a wide range of social, cultural and leisure activities.  Move here and you will soon find yourself part of a vibrant community with excellent schools and amenities.

A distinct advantage is proximity to London: Cambridge is well served by road and rail links, and is within easy distance of the major London airports. 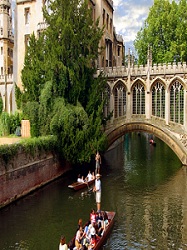 Visit Cambridge, the official tourist information website, describes Cambridge as ...'home of the famous University, carols in King's College Chapel and punting on the river Cam. Cambridge is a compact cosmopolitan city with outstanding architecture old and new. The beauty of its ancient centre is preserved with its walkable medieval streets, college courts, gardens and bridges.'

Find out more travel, leisure and community facilities, and accommodation in and around Cambridge.

Indie Cambridge - A guide to, and a celebration of the city’s best independent traders, venues and events

Cambridge Online - a wealth of information about Cambridge, including links to local resources and amenities

Cambridge and the University

The University of Cambridge - Things to see and do

Getting to Cambridge: The political philosophy of Britain’s most successful city
The Economist 22 August 2015
...What began with the creation of business parks to host enterprising dons and their doctoral students in the 1970s has grown into the most exciting technology cluster in Europe.

Watch a video of the Cambridge Innovation Leaders Conference 2015

Silicon Fen: how modern Cambridge became a tech phenomenon
CAPX 28 July 2015
Cambridge is growing faster than China, the city’s workers enjoy average earnings of £40,000-a-year, far higher than elsewhere in the country, and unemployment is one of the lowest...

Why Cambridge is at the heart of Britain's economic recovery: "New investment and a unique relationship between business and academia is transforming the Silicon Fen," says Margareta Pagano in The Independent - 17 February 2014.

How can anyone say there is "a little less tech luster in Cambridge" right now? "I could not be more excited about the prospects for Cambridge's tech scene... what Cambridge lacks in style it more than makes up for in substance," says Charlie Fletcher of Taylor Vinters LLP in Charlie's Venture Blog
- 2 February 2014.

Clare Balding's Cambridge: "I lived there for three years when I was at university (at Newnham College). The city’s got it all, but at the same time isn’t too big, plus it has such a lovely feel to it," says the broadcaster Clare Balding in The Telegraph - 2 November 2012

More about the East of England