100 years and counting with Daniel Powell

Electrical Avionic Technician, Daniel Powell shared his apprenticeship and career journey to date to help us celebrate 100 years of apprenticeships. 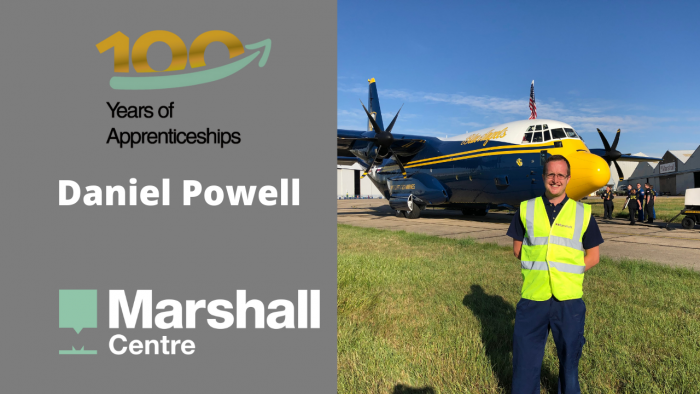 Electrical Avionic Technician, Daniel Powell started his journey as a Marshall Apprenticeship 2008. Dan was not sure what he wanted to do with his career when he finished A-levels at school and a sports NVQ at college. He decided to go to a few job fairs and that is where he first found out about the Marshall apprenticeship scheme. After applying and being accepted, he began his career as an Aircraft Fitter and started his four-year apprenticeship specialising in electrical avionics.

“I remember walking around after my first interview and wondering if I will ever find my way around the site. The aircraft looked massive but after a few months, I found my feet and now have vast knowledge of the C130 (Hercules) platform.”

The electrical course syllabus included a one-day release to study aircraft theory at Bedford College, three months in our Marshall Centre training facility, six months working on civil aircraft and the remainder of the course on military aircraft.

Dan completed his mechanical hand skills, with 2 weeks of electrical training. He was lucky enough to complete the Lufthansa electrical hand skills training through Marshall with, Kierron Mascall and Robin Lipscombe.

“I didn’t expect to be completing airframe work, but the instructors gave me valuable hand skills and I’m grateful that I was able to experience three months in the workshop. It made me realise that I really enjoy the practical element of my role and has helped with my personal development throughout my career.”

Dan remembered a day when they could not find the padlock keys for the tool cupboards, so no one could complete their work. A forward-thinking apprentice found some bolt cutters to solve the problem but, luckily, Robin had a master key. He also recalled a moment when someone had a remote-controlled helicopter in the training centre, which was a fun spectacle.

Every day is different when you work on aircraft, Dan worked on an aircraft that was previously infested with black widow spiders before it arrived at the hangar. His team had to complete training from our Health and Safety department on how to spot black widow nests and what to do if someone was bitten by one. This was a piece of training he didn’t expect to receive working in Cambridge.

Dan was keen to qualify as an Avionics Fitter, which meant he finished his portfolio two years before his finish date. The main aircraft he completed in-depth maintenance on throughout his career are the C130Js, completing work on the foreign military customer inputs. He has also formed part of various teams, completing modifications such as the fleet-wide engine re-wire programme, block software upgrades and communication, navigation, and defensive system installations.

In 2016, Dan was promoted to Electrical Avionic Technician and was one of the first to complete the ‘Fitter to Technician’ training. He also travelled to Brize Norton and Boscombe to re-wire engines and modify the Radio Frequency Defensive Aid System on the RAF C130.

Aircraft modifications and software upgrades are Dan’s favourite aspects of his role and one of his biggest achievements was being the Avionics Technician on the US aircraft, Fat Albert, as it was such a unique and iconic project.

“It was a privilege to be involved on this major modification input. To be involved and work on one of the most famous C130 in the world was a onetime opportunity and I enjoyed every minute of it. Seeing Fat Albert’s air display before it flew back to the United States, provided a real sense of achievement and pride, which I will never forget. I’ve worked on some amazing projects and been given some good opportunities at Marshall. It’s also been great to share my knowledge to help train current apprentices as I’ve been in their shoes!"

Dan’s next steps are to continue working towards his B2 maintenance licence, which means he must undertake various CAA regulated exams and modules.

A huge thank-you to Dan for sharing his journey and good luck on your CAA exams!