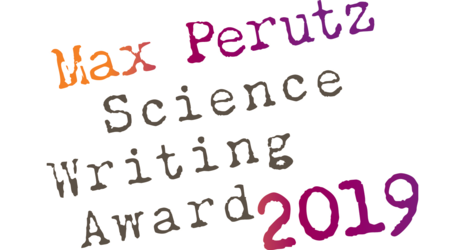 The winner, who will receive a £1,500 prize, will be announced at the awards ceremony on 15 October at the Royal Institution, London.

This year’s judging panel is made up of:

The Max Perutz Award asks MRC-funded PhD students to write up to 800 words about their research and why it matters, in a way that would interest a non-scientific audience.

More than 100 entries of a very high standard were received this year, which made the shortlisting a challenging task. The MRC extends congratulations to the following exceptional writers:

The award is named in honour of one of the UK’s most outstanding scientists and communicators, Dr Max Perutz. Max, who died in 2002, was awarded the 1962 Nobel Prize in Chemistry for his work using X-ray crystallography to study the structures of globular proteins. He was the founder and first chairman of the MRC Laboratory of Molecular Biology in Cambridge, the lab which unravelled the structure of DNA. Max was also a keen and talented communicator who inspired countless students to use everyday language to share their research with the people whose lives are improved by their work.

All of the shortlisted articles will be published on the MRC website after the awards ceremony, on 16 October.